Architecture for all: Open House Prague 2021 commemorates the 150th anniversary of the birth of Jan Kotěra

The seventh year of the Open House Prague festival will take place this year from August 2, 2021. In addition to a number of accompanying events, 80 normally inaccessible buildings and other spaces are opening to visitors in the last weekends. festival website. Admission to all buildings is free without prior registration.

“Architecture for all” – this is the motto of the event, the organizers of which advocate that tours of the buildings be accessible to the general public, including families with children and people with visual and hearing impairments. This year’s festival will take place in the spirit of the 150th anniversary of the birth of the prominent Czech architect Jan Kotěra. “I am glad that we managed to combine several of Kotěr’s well-known Prague buildings into the program. In addition to Laichter’s house in Vinohrady and Trmal’s villa in Strašnice, we will now invite visitors to Vršovice Waterworks in Michle, which we have been striving to open for many years as part of the Open House Prague festival, ”says festival director Andrea Šenkyříková. Accompanying events for this jubilee will continue after the end of the festival. Well-known architectural historian Zdeněk Lukeš, among others, participates in them. “Jan Kotera (1871–1923, editor’s note) he is considered the founder of Czech modern architecture. He graduated from the Vienna Academy of Arts with Professor Otto Wagner. He was not only an architect, designer and urban planner, but he also devoted himself to scenography and taught at the Prague Umprum and the Academy of Fine Arts, where he promoted modern trends in architecture. Its key buildings in the modern style include a museum in Hradec Králové, Laichter House, Mozarteum and its own villa in Prague or the National House in Prostějov. Little is known that he was also one of the few Czech architects who implemented projects abroad, “says Zdeněk Lukeš.

In the years 1908 to 1910, one of the key buildings of Prague’s architectural modernism was built in Chopinov in Královské Vinohrady. The house was designed by Jan Kotěra for the owner of the Jan Laichter publishing house, a close friend of TG Masaryk. The dominant element of the building is a centrally located bay window topped by a balcony. The facade is covered with various types of structured plaster and gray masonry. In front of the front ground floor, the office space of the publishing house was originally connected with a large family apartment through a staircase hall, decorated with ornamental paintings by František Kysela and carved owls, symbols of wisdom and education, which to the life mission of the house owner. The second and third floors were reserved for rental apartments with a separate entrance from the facade. In 1937, the fourth floor was added, respecting its concept of the original concept of division of facades. In the courtyard behind the house there is a small garden with a water feature, which was also designed by Jan Kotěra. “The house was designed as a publishing house and the form was to be adapted accordingly. All have been designed to suit the rooms and operation of the publishing house – from the moment you come up with a book, through the typewriter and editor’s rooms to the typesetting, all for connected elevators with warehouses with a book storage system imported from Strasbourg. “Adds Štěpán Lars Laichter, co-owner of the house and at the same time the great-grandson of Jan Laichter. This year, visitors to the festival can visit not only the tour of the interior of the villa and the garden, but also the special composed evening with dancing and evening tour, which will take place on August 4 as part of the accompanying program of the Open House Prague 2021 festival. Three short dance paintings will touch on current issues of a common Europe, its history and present. Finally, there will be a tour of the house with its co-owner Štěpán Lars Laichter. The atmosphere of this unique evening is filled with a Chalupski concert. 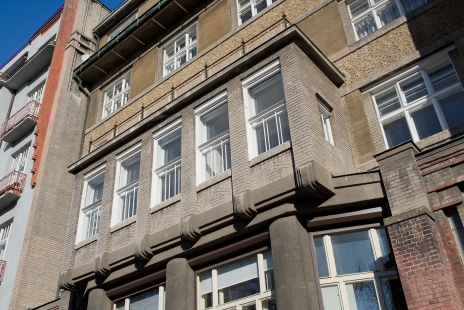 The picturesque residential area in Strašnice hides many architectural treasures. One of them is Trmal’s villa, which was built for the family of a prominent pedagogue and school inspector František Trmal. The building is an example of top villa architecture of the early 20th century and is one of the first villas and houses designed by Jan Kotěra in Prague. The family wanted to create comfortable modern living on the then outskirts of the city, but did not want to give up the charm and typical elements of the countryside. The architect thus combined English modernism, Art Nouveau geometry and Slavic folk tradition in the design of the house and garden, creating a country house with details of folk architecture, such as painted gables with folk ornaments and folk sayings or carved columns. The impression of English architecture is completed by a high truss, conical chimneys, a hint of half-timbered masonry and the layout of the house – divided into representative rooms on the ground floor, a private part on the first floor and a two-storey staircase hall as a central element of the house. The house currently houses the agency and publishing house Foibos Books, which operates the Kotěr Architecture Center and specializes in the presentation and promotion of architectural heritage. On Sunday, August 8, a commented tour for children will also be produced in Trmal’s Villa, which will reveal more about the building and architecture in an entertaining and interactive way. 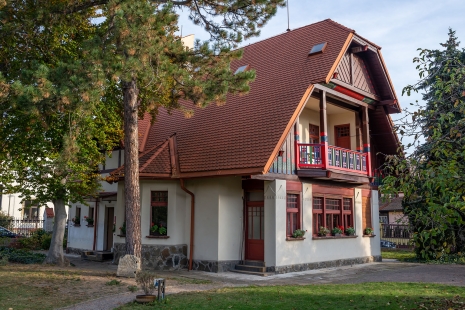 The water supply complex, built between 1906 and 1907, consists of a tower and groundwater reservoir, a pumping station and a residential building. For many years, the Vršovice water tower has been the dominant feature of the Michle district of Prague. The building is made of gray masonry with a fine decor around the windows on the top floor, the top is formed by a chalice-shaped water tank with a geometrically divided mantle. It is characterized by simple elegance, which was originally highlighted by an alley of poplars on the access road. Above the entrance to the tower is the emblem of the town of Vršovice. The columns on the sides of the staircase are finished with decorative pyramidal turrets and the impression of the tower’s strength is enhanced by a plinth made of stone masonry. All buildings in the area were made with attention to detail and color scheme. Here Kotěra elevated simplicity and functionality to a means of expression. The Vršovice waterworks was not connected to the Prague water supply network until 1927. The collection wells in Braník were located in the flood area, and after the floods, the water from them became defective. The Vršovice water supply system thus probably became the first water supply system in Czechoslovakia where water was chlorinated. The tower reservoir functioned until 1975, today only the underground reservoir serves its purpose. In 2016, the entire listed complex was reconstructed. On Sunday, August 8, a tour for people with hearing impairments will also be produced at Vršovická vodárna, which will be translated into Czech sign language with simultaneous transcription. 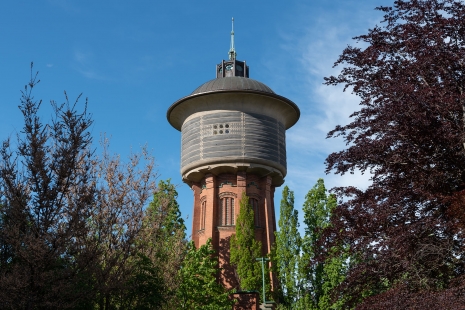 Jan Kotěra was not only an important architect, but also a teacher. His students included, for example, Max Gerstl, Josef Gočár, Vilém Kvasnička or Otakar Novotný, and some of their buildings can be visited for free at this year’s Open House Prague festival on the weekend of August 7 and 8. These are the ARA Palace, the Zenger Transformation Station / Kunsthalle Prague, the House of Agricultural Enlightenment, the Štenc House or the studio of the sculptor Jan Laud on Libeň Island.

A ride on a historic tram

The accompanying Open House Prague program also includes a ride on a historic tram, the author of which is Jan Kotěra. The ride will take place in the company of the well-known historian of architecture Zdeněk Lukeš, who fills the ride with expert interpretation. The projects will take place not only within the festival, but also during the following months until the end of 2021. Information on new dates available at: https://www.openhousepraha.cz/kalendar-akci/. 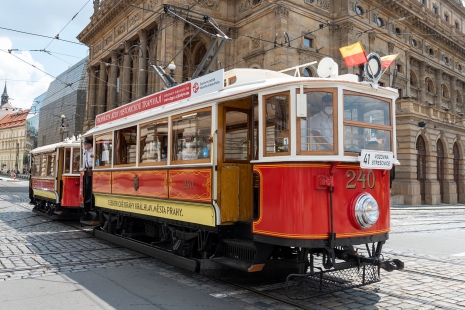 Open House Prague, whose media partner is INTRO magazine, among others, is part of an international network of festivals Worldwide open daywhich take place in 50 cities around the world. Thanks to the involvement of a stove of volunteers who help with the opening of buildings, Open House Prague is not only a cultural holiday of the city, but also unique events with community and social impact. Recruitment of volunteers for this year has already begun. Applicants can apply through of this link.