Fruit shop in Kolonaki, 1904. Owners, relatives and employees are immortalized with their rich food material together with customers and passers-by. (Photo by ALEXANDER LAMONT HENDERSON / BENAKI MUSEUM) 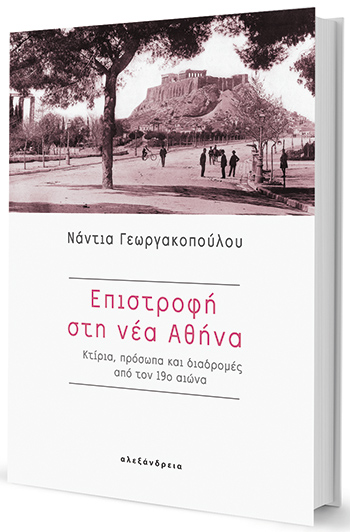 “Athens is arousing interest again”, Nadia Georgakopoulou, the author of one of the most recent and most unexpected books about our big city, tells me. She has a tenure in the banking sector, but with great success in History and Archeology and experience in marketing and communication. A Man with a kaleidoscopic view of the world, with international experience, but above all a researcher – read and traveled – with method and courage. Her book “Back to New Athens” (buildings, people and routes from the 19th century) was recently published by Alexandria and claims a new look for the city itself. “It is important to rediscover who we are,” says Nadia Georgakopoulou, and I confess that after reading her book, a broad and dense composition about “buildings, people and paths from the 19th century”, she thought a lot about the route of Athens and more for the image we bring of ourselves for the city, our society, the country itself.

But above all, “Return to New Athens” is a stranger that offers pleasure. In essence, it explains the “Athens” phenomenon in a way that is not obvious. One of the main gifts of the book, apart from the in-depth research and the multitude of them, is the integration of the “Athens phenomenon” in the international framework. Nadia Georgakopoulou attempts to dedicate and naturally speak of the new capital of the 19th century as an urban phenomenon, symptom and product of the globalized 19th century and not only as a consequence of the geopolitical systems of the 1820s and 1830s. way of narration, which is not completely linear, as well as the constant reference of the Athenian treaty in the context of international experience.

Nadia Georgakopoulou talks about the 19th century as if she had lived it herself. In other words, there is an experienced relationship with its most extensive material. But the transfer to the 19th century is done in a way that ensures the spaciousness of the gaze and the continuous export to the past and the present through short flashbacks, insertions, references, and mainly through the constant reference of the “Athens” case to the European frame. There is a saving of all the adventure of spirit and matter that led the post-Napoleonic world to the development boom and the networking of everything in 1900. All this time, and later, Athens is a working idea, the mobility of people and goods give birth to new compositions and presuppose new experiences. “The emergence of a new face of the city happens in parallel with the emergence of a new world”, notes Nadia Georgakopoulou.

In addition to telling the story of the city and its people, in addition to the excellent architectural analysis, the sporadic and discreet insertion of the short story and the reference to the family and personal path, in all this case the mediation of multiple looks advocates another reception city. This book is also a starting point: The way in which we experience and understand Athens, but also the way in which we proceed to a conscious reflection. Nadia Georgakopoulou emphasizes, indirectly and directly, that the “central to history” (such as the “dark times” between late antiquity and the 19th century) are the result of intellectual, national and geostrategic systems that may have served some additional But now is the time to regain not only a unified sense of the path, but to ensure that the new relationship with the city includes and is not excluded, that this new psychic intimacy works with the knowledge of the spirit of every age, there is no space (and reason) for “intentional trials”. So, everything goes into one stream. From the Phanariotes and the Bavarians to the plebeians of the Belle’s era, the Greek bourgeoisie and the small and large movements of the populations.

The intersection attempted with this book is a departure from the culture of defeat. A digested and for many generations accepted and imposed system of understanding the country, the city and the self were the milestones of the pressure on Hellenism. Ottoman rule, dictatorship, the explanation by international capital, foreign control, unfortunate wars, disasters, retaliation, the constant retreat of bourgeois charm in the face of a growing mass was and was a common reference vocabulary. Nadia Georgakopoulou reads Athens as a success experiment and in any case incorporates any unfortunate moments into an exit of internalized contradictions such as any historical analysis with a disposition of understanding and not complaint.

After all, this book has the raw material of deposition. Far from the “narrative of defeat” that has been formed since the 19th century aspects and aspects of the national psyche, the narration of Nadia Georgakopoulou has faith in its material. It is important, as she says, for everyone to feel part of the city, “to be in relation to your city”, to proceed in a stream of History, without weight but with consciousness. Athens is coming out with a trophy.

5 destinations for autumn trips near Athens

‹ The Museum of Fantastic Illusions in Prague is a world of optical illusions. You can take them in photos › TV Architect presents – Šemík’s Bank Project (architect Stanislav Fiala and Prague 5 representative Jan Hřebejk)