Hotels in Prague are empty. We need a course of work, hoteliers appeal

“For the summer, we expect occupancy of about 25 percent, people now go mostly out of town, to the sea or in the mountains. We have launched several campaigns for European and American clients, but we expect demand to be minimal, “said Martin Dell, CEO of the Four Seasons Hotel in Prague. Although the government relaxed the conditions for arriving in the country in June, the hotel did not see an increase in demand. So far, Four Seasons had to increase the price only in the restaurant, for other services it only limited the opening hours.

“Prague is a cursed city for foreign tourists and, with all due respect to domestic tourists, it will not save Prague, which is the gateway to the Czech Republic. The vast majority of larger hotels are sealed, only the technical condition of buildings and property is guarded, “pointed out the hotelier Viliam Sivek, who, in addition to running his family guests, also heads the Czech Tourism Union.

The sky is full of airplanes

Until, according to Sivek, the sky is full of planes, the situation in the capital will not improve. “For example, at Sivek Hotels, we do not provide any tourist from abroad outside of travel services,” he added. Prague hotels are mainly sought after by tourists from the United States and Germany. In addition, hoteliers, like restorers, face insufficient staff. According to Sivek, tourism, which employed a quarter of a million people before the pandemic, left about twenty percent of them, especially in large cities.

The occupancy of Prague hotels is negligible in comparison with other European capitals. According to a survey by the Association of Hotels and Restaurants, only 11 percent of the rooms offered were occupied in May, when the measures were relaxed. For example, in Paris at that time occupancy was a quarter, in Warsaw or Budapest it was one-fifth. “Hotels in cities are still empty and face relatively significant financial problems. The reason is still the failure of conferences, corporate events and the absence of foreign tourists, “said the president of the association Vaclav Starek.

The need for a course

The almost non-existent conference tourism has a great impact not only on event organizers and hoteliers, but also on a number of related fields, such as catering. Hoteliers and tourism entrepreneurs agree that although the government allows them to do business, many of the hotels are effectively closed due to tourism restrictions. According to them, employment support, which ended in May, should continue. “What would help us is clearly the continuation of the Antivirus program or the launch of a course. For Prague, foreign clients are key, and without it or compensation from the state, there is a risk that many companies in tourism will not survive this summer, “said Dell.

We are trying to complete the discussion of the legal exchange rate in June, which should, if necessary, replace the extraordinary wage compensation program Antivirus. However, the government must always decide on its activation, but it is not considering it yet. “It’s paradoxical because there is a risk that the investment in maintaining employment in the industry will be wasted. At the same time, it would only take two to three months if the situation does not deteriorate significantly, “said Stárek. According to Sivek, strong subsidy programs would also help. 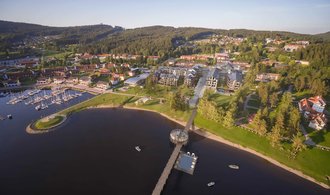 The Prague City Hall has launched the In Prague at Home program to support tourism in the city, which focuses mainly on domestic travelers. For accommodation in the hotel, they receive a tourist voucher for free or discounted admission to monuments, museums, zoos or cultural events. “The In Prague at Home program is trying to attract more than 70,000 visitors to Prague during last summer’s season,” said Hana Třeštíková (Prague to herself), councilor for culture.

However, tourism entrepreneurs are now anxiously looking forward to the onset of a new, more contagious COVID-19 delta mutation. As a result, the government will reopen measures for entry into the Czech Republic on Thursday, and in some cases vaccinations are also to be tested. The situation is deteriorating throughout Europe, so far the vaccination coverage of the Czech population is only a third, and the vision of at least past sales is once again moving away from entrepreneurs in the field.