Prague: The train to Václav Havel Airport will start running in 2028

Download The railway connection between the center of Prague and Václav Havel Airport in Ruzyně was negotiated by the Prague City Hall in 1996. After this incredibly long time, it seems that its final appearance has not only the planned route, but also some key stops. After SŽ published the form of the Nádraží Veleslavín railway station last year, a few days ago, it also published the winning version of the planned Václav Havel Airport stop on the Instagram social network.

This was designed by the architectural studio Idhea, ie the same one, which won an international architectural competition for the form of the Nádraží Veleslavín stop, which will be located on the new line just a few closer to the city center. “The new station Prague – Václav Havel Airport will be sunk in places where Aviatická Street is located. The new station will have two pieces of tracks surrounding the island platform, ”Nela Friebová, a spokeswoman for the Railway Administration, described for Blesk.

The station will have two lobbies. From the western one, passengers can easily get to Terminal 2, and the eastern vestibule connects the railway station with Terminal 1. “In particular, access to terminal 2 will be very short, Prague Airport is preparing its completion in coordination with the Railway Administration, so that passengers can get into it “dry feet”“A spokeswoman said.

Now it is necessary to take the last step before starting the construction. “The railway administration is now preparing a tender for the drafter of the documentation for the building permit,” says Friebová. The estimated cost of the planned documentation is about 100 million, it will also include a digital model of the future railway station.

Train connection is a must

The direct railway connection welcomes the airport itself. “There are currently only two other airports of comparable size in the EU that do not have a rail connection to the city center, these are Berlin’s Tegel and Dublin, “said Roman Pacvoň, a former spokesman for Prague Airport. It is also expected that people will make more use of rail transport, which will be more convenient and thus reduce the use of taxis and buses. All this should relieve the European congestion, which is currently extremely congested in the future. The new connection should be able to travel from the airport to the center of Prague in 25 minutes.

Thanks to the new railway station, the immediate vicinity of both terminals will also change. Several buildings will be built here. In addition to two parking houses, there is also a so-called Skywalk. This three-storey building will be a kind of communication artery between terminals, other buildings and the mentioned stop. The proposal also envisages the creation of shops, restaurants and other services that belong to the modern airport.

The stop at Václav Havel Airport is part of the newly planned railway connection between Prague and Kladno, which also includes the just-mentioned turn to the airport. The stop should start building next in 2024, in 2028 the first passengers should get off at it. 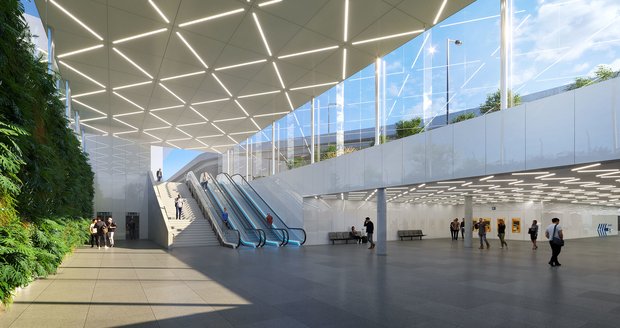 Slavia footballers move away in the Conference League, Maccabi lost in Haifa 0: 1 | iROZHLAS

‹ Orlando Bloom and Adam Sandler are filming in Prague. Hollywood stars are back › Oh, Amsterdam – four gifts for Amsterdam cookies