Burning truck and car, girl in shock. One of the drivers did not survive the accident on the D11

/ PHOTO GALLERY / On Monday afternoon, three trucks and two cars collided on the D11 motorway in the direction from Hradec Králové in front of Prague. Unfortunately, one of the drivers did not survive. The traffic was stopped for a long time due to a tragic accident in the direction of the capital. In addition, another fatal accident occurred at the 14th kilometer night. 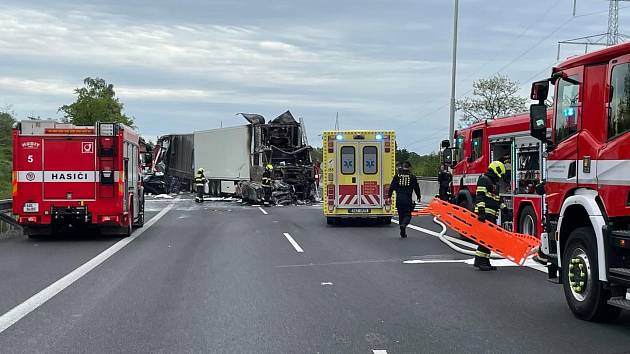 An accident of several trucks and cars with a subsequent fire blocked the D11 motorway. One of the drivers did not survive.

A pile crash occurred at 0.5. kilometer of the Hradec Králové motorway before the entrance to the Prague ring road, on the section between Satalice and Běchovice, which was formerly called the Eastern Link. According to the interveners and the photographs of the Roads and Motorways Directorate, the situation was very dramatic. Criminalists from Prague, who took over the case from colleagues from the Central Bohemian Region, will deal with the circumstances of mass accidents.

On the D11 motorway in the direction of the center, we intervene in the event of accidents involving three trucks, followed by a fire in the cabin of one of them. We use two streams of water with foaming agent, there is a stuck person in one truck. pic.twitter.com/yEgS3nmynQ

The cab of one of the trucks started to burn, and a car hit the fire. Another truck was stuck in another truck. Firefighters also had to rescue a woman from another car.

Two men died in a car accident in Strakonická. The “snare” were fined

“We use two streams of water with foaming agent,” Prague firefighters announced on an official Twitter account. “We are catching up the cab of one of the trucks and we are rescuing another,” they added later.

According to spokesman Martin Kavka, Central Bohemian firefighters also intervened on the D11 together with units from the capital. “The rescue truck of the Railway Administration’s fire brigade is helping to tear the trucks apart,” Kavka revealed.

A rescue helicopter flew to the scene

The capital’s rescue service informed that two crews, including a doctor, an inspector and a profession, were also air rescuers.

“Unfortunately, one truck driver did not survive the accident. The woman is seriously injured after being rescued from the fire brigade, “said the rescue spokeswoman Jana Poštová, adding that the thirteen-year-old girl suffered a shock. According to a spokeswoman for Poštová, the other two participants in the accident were transported consciously by ambulance to the hospital.

PICTURE: A serious accident blocked the seven-hour raid on the Prague Ring Road

Central Bohemian police officers stated that the motorway is (and will be for a long time) impassable in the direction of Prague. At around 5 pm, the convoy stood for several minutes due to the helicopter landing also in the direction of Hradec Králové. Drivers can use detours over road 611. Police also safely turn vehicles for 8 km in the opposite direction to exit 8 Jirny. “Drive with great caution!” Begs the motorists. The operation was partially resumed after midnight.

CENTRAL BOHEMIA – D11 HIGHWAY – At the 14 km km of the D11 motorway in the direction of Prague, IRS units are again intervening in a car and truck accident. Unfortunately, the accident required one fatal, one severe and light injury. The highway to Prague is closed. #policiestc

However, the highway to Prague immediately closed again, because at the 14th kilometer a car collided with a truck. According to the police, the accident claimed one life. Another person was seriously injured and one lightly. The D11 was again fully passable again at 4:00.

Protests by local residents against concerts in Braník: Prague will address the noise decree

At the weekend, road workers will completely close the highway to Prague. You will not pass in Svijan