After almost four months of closure, the botanical and zoological gardens have been open again as part of anti-epidemic measures since 12 April, however, only access to outdoor exhibits is allowed and the number of visitors is limited to 20 percent of capacity.

Prague Zoo on Saturday 8052 people. Before 11:00, however, the zoo stated on Facebook that it had reached the permitted limit of visitors at one time and was temporarily closed, about 100 people were waiting at the three entrances at ten times. According to a spokeswoman for Dosedělová, this happened for the first time since the opening on April 12, last weekend was not as nice as today and not so many people went to the garden. She therefore advised people to keep track of the current number of visitors on the zoo’s website.

A large number of people went to the zoo on Sunday, especially in the morning. “We reached the allowed limit of 4,000 visitors at one time and the zoo was temporarily closed,” he appeared on a Facebook page shortly before eleven o’clock. But queues like Saturday did not form. A total of 7332 visitors arrived.

The director of the botanical garden, Bohumil Černý, stated that the complex is currently in full bloom. Blooming sakura, magnolia, plums and flowerbeds with blooming daffodils, tulips and other spring flowers await visitors. “In addition, the Botanical Garden has officially launched another season this week to introduce you to poisonous plants. You can get information about them at the Shade-loving Plants exhibition in the Upper Garden, which is accessible from K Pazderkám Street, from the Bohnice housing estate, ”added Černý.

Zoological and botanical gardens have been closed since last December 18 due to a government decision under restrictions against the spread of covid-19. Last spring, they were not allowed to operate from March 13 to April 27, and due to the second wave epidemic, again from October 9 to December 2. In connection with anti-epidemic measures, the operation was previously limited by the maximum number of visitors or a ban on entering pavilions.

The director of the zoo, Miroslav Bobek, wrote on Facebook that the zoo is sorry that people had to stand in lines. “It is not conceivable for us to prevent holders of valid season tickets (and other types of long-term tickets) visit the zoo by starting to sell only online tickets valid for one specific day, “He added. 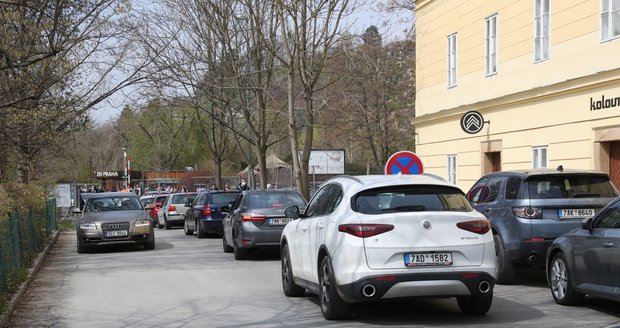 The sunny weather has attracted thousands of people to Prague’s zoological and botanical gardens. At one point, the zoo reached the maximum permitted capacity of 4,000 visitors at a time, so it had to stop entering the area for a few minutes, creating queues in front of the entrances. (April 24, 2021)

Czech Republic has a hundred new charging stations, the most charged in Prague

Together, the Pirates and STAN are negotiating after the election: They are fine-tuning the coalition agreement

TOGETHER, Pirates and STAN in Prague want to have a coalition agreement ready next week

‹ The listed FiX held the first concert for people this year, for cars as a new bass player › For more than two months, Prague Airport is shifting traffic to the side runway, and will also relocate the camera