All four poles are where you have to travel. It is not far from Prague’s public transport.

You can go to the flight by metro, bus, train or tram and let yourself be brought almost to the place. Or the Prague Poles will become part of your longer or shorter trip.

VIDEO Prague Poles on a scooter

The North Pole of Prague lies on the eastern edge of Hovorčovice at the railway crossing, where Veleňská Street ends. The symbolic concrete column with the description does not stand exactly on the pole, because it is in the protection zone of the railway on the other side of the tracks.

TIP for scooters: From Letňany to Hostivař.
Route: 31 km, GPX at Strava.com

The bus will take us high above Prague to Letňany. More or less along the plain, we will reach Hovorčovice by streets, roads, cycle paths and cycle lanes. We continue in the same style through Veleň, under Zlatý kopec, where people lived three quarters of a million years ago, to Vinoř. We will pass through the chateau’s Vinořský Park along a forest path to the adjoining Satalická bažantnice. 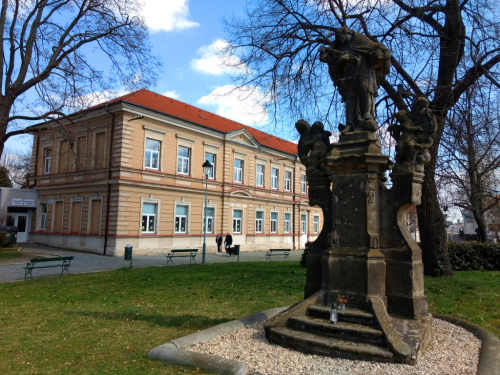 From here it goes fast on the asphalt. We will visit Černý Most, Dolní Počernice, along the cycle path around the Slatina, Dolní Měcholupy and Hostivař reservoirs to Zahradní Město to the Horydola editorial office. 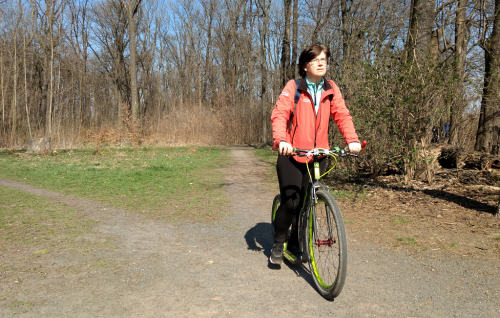 The South Pole of Prague lies on the Vltava cycle path in front of the villages of Vraná nad Vltavou. The column is erected in a grassy strip between the cycle path and the road on the right bank of the Vltava. On the left bank in Strnady stands the Research Institute of Forestry of Hunting at the same level.

TRANSPORT: By train to Vraný nad Vltavou from Hlavní nádraží, Vršovice or Braník. On foot along Nádražní Street to the ferry and along the cycle path to the pole, a total of 1 km. By bus to the stop at the sign Jíloviště, Research Institute. Lines No. 314, 338, 360, 361 and 390 run here from Smíchov railway station. By steamer to Skochovice and walking along the right bank of the Vltava through U Jezera, U Elektrárny and Nádražní streets and finally along the cycle path to the pole 3 km. By bike along the Vltava cycle path from Výtoň 15 km. The right bank variant is marked as A2. If you do not like heavy cycling, let the ferry from Veslařský ostrov in Podolí on the left bank (the plane applies here) and take the less frequented A1 cycle path to Lahovice and cross the Berounka and Vltava back to the A2 cycle path along the Komořanská footbridge suspended under the Radotín Bridge. 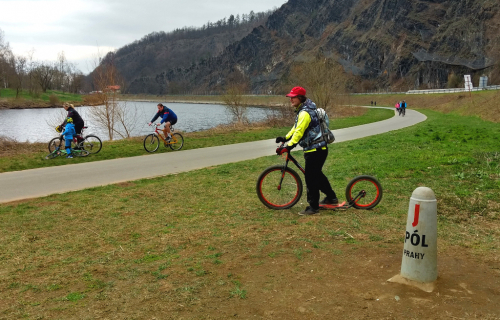 TIP for scooters: From Záběhlice via Dolní Břežany to Vraný and along the Vltava cycle path.
Route: 42 km, GPX at Strava.com

From the editorial office of Horydola in Zahradní Město, we go through Spořilov and Roztyly to Kunratice to Horní and then Dolní mlýn. We will stretch through Libuš and Písnice to Cholupice and finally we will get out of housing estates and satellites. Without mobile navigation, we would be lost. 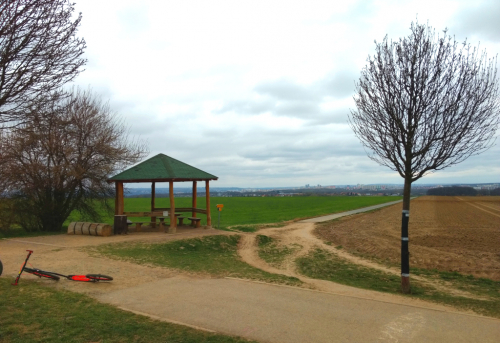 A brand new bike path leads from nowhere to nowhere. The asphalt is stretched directly across the field from the Prague ring road, but we have to push scooters along it with fresh plowing. At the end, we arrive at the tourist pavilion on the border of Prague and the Central Bohemian Region, where a few tens of meters of connection to the continuation of the cycle path are missing. We feel like in Jiřík’s vision and we think of the council that the mentally ill people themselves are probably sitting in them. We are interested in the board of the nature trail, where usually a list of plants, animals and monuments in the area – here is an inspiring list of pubs. 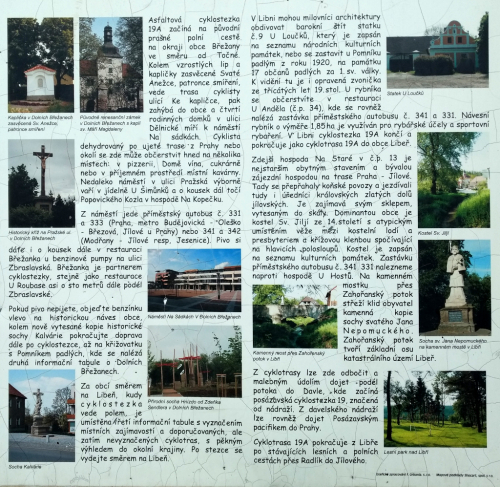 In Dolní Břežany We will detail an archbishop’s chateau converted into a hotel, ugly buildings of a brand new laser center, a renovated Olive Brewery and a basic art school rebuilt from a unified agricultural cooperative. All that time due to coronavirus closed. Along the road towards Lhota we can see a modern cemetery (left) and a boundary stone (right) from 1817, whose purpose no one knows – perhaps it marked the nearby Hradišťátko, a small Přemyslid fortified settlement, which was explored at the time, or it was a sign for the forest department belonging to the archbishopric. . 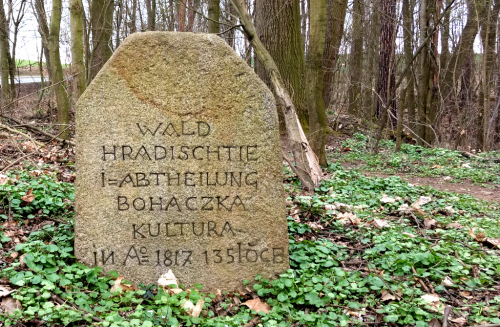 An asphalt cycle path to Zálep is currently being built on the blue tourist sign. From here we descend steeply between the rocks to Jarovské údolí. What part of the trail we ride and how much we carefully meet with a scooter in hand, we determine only our courage.

On the Vltava cycle path, we bounce back to the south pole of Prague and quickly return to Prague along the right bank. It will start raining at the Intelligence Bridge. So we will be taken by bus to Kačerov and stop for dinner at our parents. We arrive at Zahradní Město after the rain. 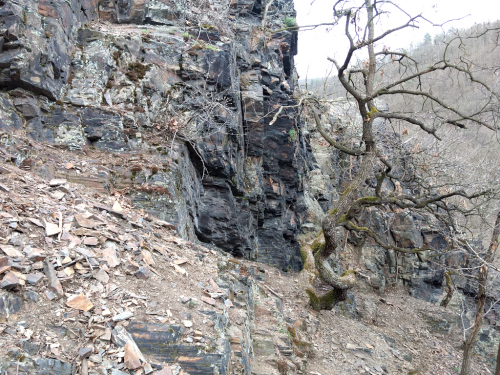 The east pole of Prague lies at Vidrholec in the Klánovice Forest between Úvaly and Klánovice. The column stands 50 meters east of the green tourist signs in a dense thicket on the edge of the swamps of Horoušanský stream.

TRANSPORT: By train to Úval or Klánovice from Masaryk railway station. On foot along the forest path along the track along the red sign to the Klánovický les – crossroads signpost and along the green sign to the place, the final meters are trodden footpath. At the crossroads of forest slopes 100 meters away, there is a rest area with a bench. It is 2.5 km from Úval and 3.5 km from Klánovice. By bus C. 484 and 655 to the Hodov stop from the Úvaly railway station, passing through K Hájovně street, it is followed by a wide forest slope to the rest area with a bench and from there 100 m south along the green sign to the pole, a total of 1200 m. By bike from the Powder Gate from Náměstí Republiky along the A25 cycle route through Vítkov, around Rokytka to Černý Most, the A26 to Horní Počernice, the A50 to Klánovice and finally through the forest along 8211 to the crossroads in the Klánovice forest 26 km. You can afford the trip for children, because it is sensitively guided in the city by a park and forest park, partly on separate cycle paths and in the countryside on side roads, field and forest roads. 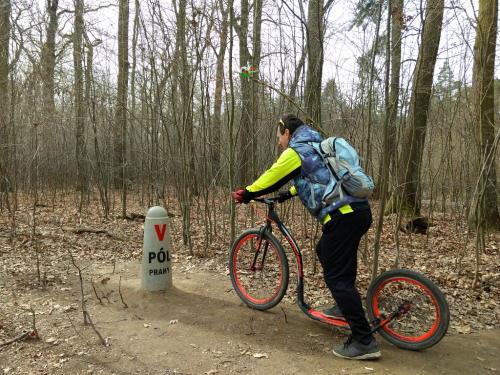 TIP for scooters: From Kolovrat via Úvaly and Klánovice to Hostivař
Route: 42 km, GPX at Strava.com

The train took us to Kolovrat on Lítačka. We take nice side roads to Nedvězí, Pacov and Březí. We will enjoy a long gentle descent through the newly planted tree line to Sluštice. We tread in front of Dobročovice into Škvorecká obora through broken field meadows. Under the mighty trees, we pass through a straight forest path, as if they were shooting. We will get to Klánovice Forest through Úvaly. Follow the clay path to the East Pole. 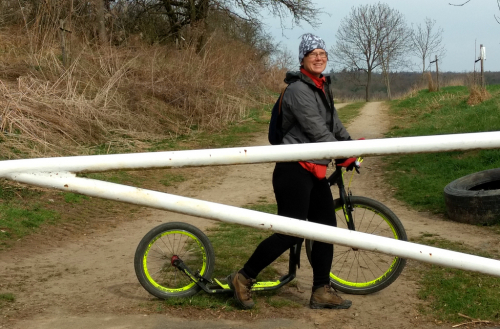 Another straight slope will take us to Klánovice, where we will detail an exhibition of sculptures in the square and in the adjacent streets. Through Újezd ​​nad Lesy, where they laugh sincerely to the ugliest houses we saw on our four-day journey, one long unpleasant climb against the wind to Koloděj. We will take a little detour there to see the castle, where many Czech governments acted. 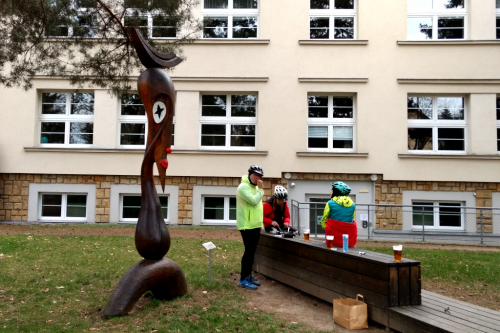 We will take another detour to Lítožnický rybník to plant this year’s pomlázka on its shore. One day we come here to take care of the willow growing from it. Then we delete what it gives, along the roads to Dubče, Měcholup and Záběhlice to Zahradní Město. Before you just open the door to the house, it snows heavily. 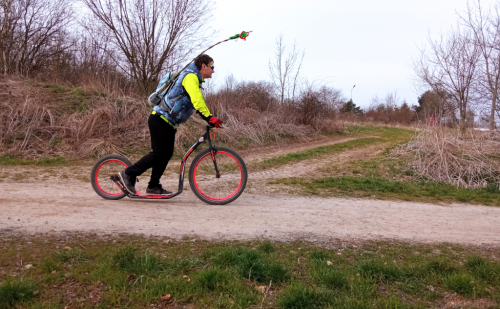 The West Pole of Prague is located behind the fence of Václav Havel Airport near the Amazon warehouse in Dobrovíz. The symbolic column is in front of one of the bran in the airport area on the edge of the former road around the cemetery to Hostivice. 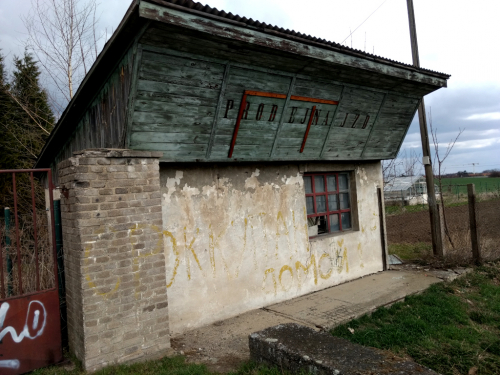 TRANSPORT: By train to Dobrovíz, usually with a transfer in Hostivice from Masaryk railway station, Hlavní nádraží, Smíchovské nádraží or Zličín. On foot along the road To the Amazon and in the canceled cemetery along a dirt road to the pole 1 km. By bus C. 306 from Zličín to Dobrovíz. On foot from the chapel by Kladenská and K Amazonu streets, further around the cemetery to the pole 1.5 km. By bike from the Dejvická metro station on Vítězné náměstí along the cycle lane to Podbaba, where we connect to the A17 Dolní Šárka cycle route, followed by the A163 Divoká Šárka to the U Veselíka swimming pool, 0078 takes us from Šárka to Přední Kopanina, A33 continues to Tuchoměřice and 8100 takes us to Amazon , where we turn onto a dirt road to the pole 25 km. The route alternates between side but busy roads with sections of beautiful nature. 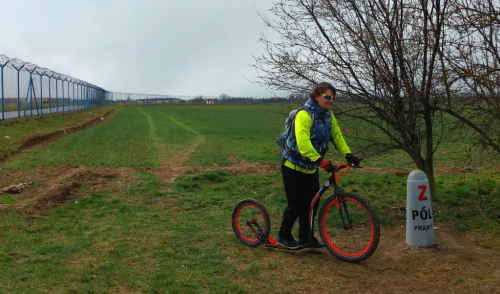 TIP for scooters: From Divoká Šárka around the airport to Řep and to the center of Prague
Route: 40 km, GPX at Strava.com

We took the metro to Veleslavín and then the tram to McDonald’s in Divoká Šárka. They looped through Dědina along the cycle path, passed the European road and bypassed the airport through the villages to the right of the City Ring Road to the Amazon. It is worth mentioning Zadní Kopanina with one of the oldest churches in Bohemia and Dobrovíz as a village monument reserve. No one maintains the alliance’s Protestant cemetery, only occasionally someone remembers and lays a flower next to a tombstone with a Hussite chalice. 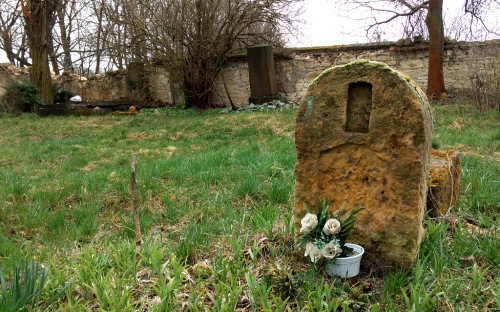 We return along the road around the castles Jeneč and Hostivice, around the bike park Zličín to Řep. Here we stop at the monastery of the Boromejek sisters, which used to take care of and now take care of the Trenčín women from the nearby prison. The robber Babinský lived his days here as a gardener and is buried in the prison cemetery. We are looking at another prison in Ruzyně.

We drive along the wall of the Hvězda summer house, where the last act of the Battle of White Mountain took place. The Moravian regiment of defeated states was massacred to the last man here. Let’s add that it was the carelessness of the German commander Jindřich Šlik, who did not let the retreat routes to the wall break before the fight, that it was only the Dutch and Germans hired in Austria, that Šlik was captured and for years he commanded the imperial troops against the states. 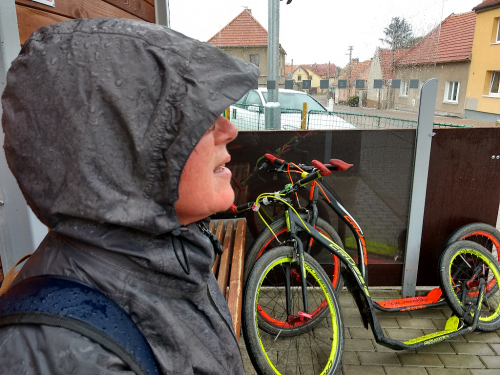 We descend to Prague around the Břevnov Monastery, which was founded by St. Adalbert at the Brusnice spring. We pass the Černín Palace, Loreta, Hradčanské Square and Prague Castle. The half-empty Nerudova street quickly leads us to Charles Bridge. In the Old Town Square we will stand at the memory of the coronavirus victims. At least half of the 30,000 dead are to blame for the current government of the dumb Andrej Babiš and his protector Miloš Zeman. We end at the main station, where we get on the tram. 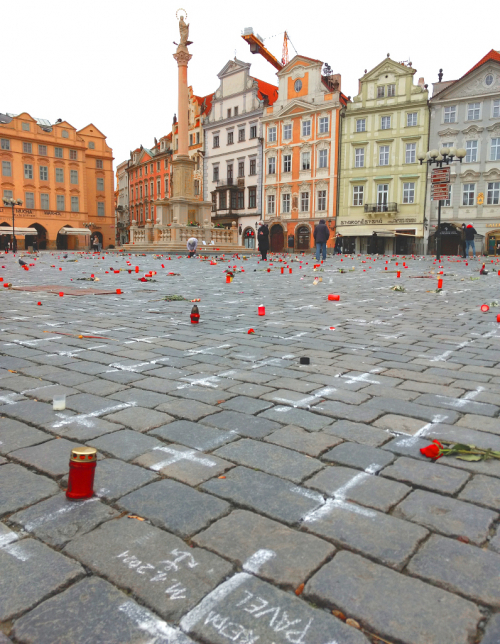 The Prague Poles were marked by Janek Rubeš and Honza Mikulka (Boys from Prague) and Ondřej Boháč (Institute of Planning and Development of the Capital City of Prague).

5 GOLDEN RULES: In the city safely on a scooter

‹ Sweden as a case study on what to do (and not do) during a pandemic › Prague – Prčice. The march with the longest and most massive tradition took place for the first time 55 years ago