Walls, bars for the night or tolls on bridges. What was the “lockdown” in Prague without the cover?

As part of the prevention of the spread of coronavirus diseases approved by Babiš’s cabinet, a proposal from the workshop of Deputy Prime Minister and Minister of the Interior Jan Hamáček (ČSSD). When traveling between districts, from March 1, it is necessary to prove yourself when crossing a imaginary border when checking the form that corrects you – for example, for work or care for loved ones. At first, Praguers wondered what this government restriction meant: “Can I move between parts of the city? Can you go for a walk in the park in another part of the metropolis? “After all, the crisis regulation allows free movement only in the cadastre of the municipality…

Form for leaving Prague: Where to find it and where you will need it

Hamáček’s office finally issued an opinion that Prague is taken as a whole. However, the Municipal Institute of Planning and Development (IPR Prague) at of the Center for Urban Planning and Architecture (CAMP) brings an interesting look at the special position of the capital. Based on the law from 2000, Prague is a city, region and municipality at the same time. Leaving aside that the current restrictions on movement are based on administrative units that disappeared in 2003, the Czech capital does not have any districts. 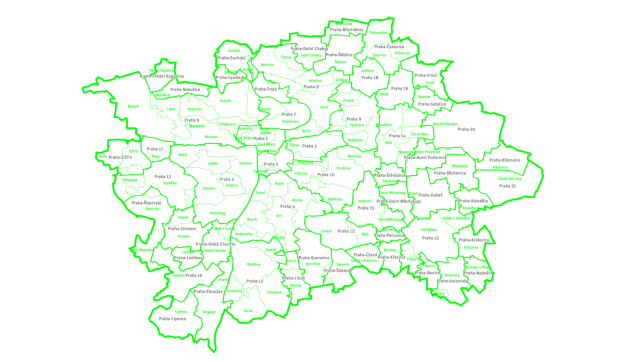 Source: IPR PragueIt is divided into city districts. There are a total of 57 of them, and twenty-two of them have a number and provide additional state administration for the territory of their administrative district – sometimes they are called “large city districts” and could be mistaken for municipalities with longer powers. Citizens turn to the local authorities when they need, for example, a building permit or other documents. Even more complex are the individuals of the cadastral area, which are used mainly for the registration of houses and land.

“The organization of the cadastre dates back to the time of the reign of Joseph II, when detailed maps have not yet been created. There are 112 cadastral areas in Prague, for example Vinohrady is today divided between five city districts (1, 2, 3, 4 and 10), “the article states. On the contrary, there are places where part of the city is only a small part of the cadastral area – for example, Prague 1 includes a piece of Holešovice and the vicinity of the main railway station towards Vinohrady. Behind the former freight station, Prague 3 extends into Strašnice.

Critique of the fragmentation of Prague

“The complexity of the whole system and the fragmentation of Prague into many city districts is regularly criticized. With the larger size, the capitals of neighboring states have fewer municipalities. Vienna is divided into twenty-three city districts, after the merger of those torn by the Berlin Wall, Berlin has only twelve districts, “our IPR Prague, with the historical division of the Royal Capital of Prague from 1784 still surviving on some street signs. many older residents of the metropolis have a fixed division into ten districts introduced by the communist regime in 1960.

Movement is not restricted in Prague. However, beware of trips to relatives and outside the metropolis

The districts of Prague-West and Prague-East belonging to the Central Bohemian Region are a separate chapter that demonstrates the absurdity of police checks when traveling outside Prague. The municipal office in Černošice, for example, takes care of 79 municipalities in the vicinity of the capital, but it also has a branch in Prague’s Podskalí. The regional office is located in Zborovská Street in Smíchov. However, due to government restrictions against covid, Central Bohemians have to shop only in their district and, for example, during sports and other leisure activities, they must not leave the cadastre of the municipality.

Population
Text on campuj.online with reference to measurements Of the Czech Statistical Office from 2014 states that the most populous cadastral areas are Stodůlky with 61,000 inhabitants, closely followed by Žižkov and Chodov. The least populated is Zadní Kopanina, where only 75 people lived.

However, in addition to an interesting legislative excursion, the municipality also offers memories of the times when covid-19 did not spread and humanity was plagued by much more serious diseases or other problems. But know that in the current “lockdown”, Praguers can add quite freely in historical comparison.

“Walking in the middle of the 19th century from still independent and developing with Vinohrady or Karlín to the city center was not just like that. Prague has lost its fortress function, but the gates are still used to control the movement of people and imported goods. In 1844, large openings for the railway to today’s Masaryk railway station were broken into the castle. Even this gate was closed with a grille at night. The liquidation of the walls could begin in 1868, the army did not want to give up large plots of land too much, and Prague must gradually buy it out. Demolition did not begin until 1874, “said Pavel Fuchs.

The embarrassment of choosing a “bridge”

The author also recalls the fact that the use of Prague bridges was tolled. In November 1815, the “bridge” was first abolished on Charles Bridge. In this context, the writer and “furious reporter” Egon Erwín Kisch wrote about Prague snobs and “picking a bridge on one tailor on all Prague bridges (with which Karlova, who was free, was never used on foot by the wealthier).” The writer Karel Čapek also describes “the embarrassment of picking and the difficulties of picking with the passers-by without small pennies in the pocket”.

In 1920, the fee was even increased, and yet toll collection on bridges was definitively abolished five years later. You would not find monuments to the “bridge” on the Legion Bridge, where tax booths have been preserved. The half-timbered toll house No. 554 on the Lesser Town side of the Mánes Bridge is a reminder of Rudolf’s footbridge, which served in these places until 1914.

The people of Prague “dared” to go to the center on Saturday. Wait

Historical sources also mention other parallels with today’s coronavirus closure and other regulations against the spread of covid. Officials who paid taxes for the transition, mostly food or coal and wood, were the target of various provocations and jokes – just as the city police now face the resistance of some of the public to wearing respirators in a public space where there are no other people.

The collectors were then called “luminaries” or “date palms”. The first name was created because on the Palacký Bridge their booth was located at the Lumír and Píseň sculpture by Josef Václav Myslbek. The second name was derived from the fact that they “knocked” from a bowl of small coins.

On Prague website writes Linda Nová in an article about how harshly they joked with the selection workers: “First they heated the coins in their pipes and placed them on the bowl with their gloved hands. Their outburst of merriment accompanied the moan of the collector, who burned his fingers on the hot coin. When he became upset, he was also taught that no prescription dictated whether to pay with a hot or cold tailor. “

Blatný does not count on dismantling for Easter. Smaller companies will also start testing

Moreover, as now, exceptions applied then. Soldiers and members of the Prague Police Force had free crossing of all Prague bridges if they were wearing uniforms. It is interesting that the food tax on the “line” of large cities of Austria-Hungary (or “action”) was abolished by Czechoslovakia after its re-introduction in 1942.

Before Easter 2021, government officials are talking about
prolong the emergency and do not want to “loosen up” measures in order to already collapse congested health care. For Prague residents, nothing will probably change in the restraint for a few more weeks. So every age has its pitfalls…

Is this the Czech youth? Prostitution, drugs, booze and rape. Its participants will be ashamed of Prague – day & night

‹ Sweeten your life. These are the best Prague cakes in Prague › Drink and eat. Students from Prague make unique edible cups