IPR Prague: How did the fight for better conditions for trees in the city take place?

Trees look above the ground. But to grow, you need a familiar space under the surface.

The building tree and tree line in the streets of Czech cities is complicated by pipes and cables. These are easily laid under the surface, take up a lot of space and practically make the tree planting practically. Owners and managers are convinced that trees can only be where the city is left, and they always have priority. In 2015, IPR Prague is participating in the revision of the SN 73 6005 standard – a space under the direction of technically equipped equipment and tried to define a tree in the street for the first time. The new standard came into force in November 2020.

Dark world under the sidewalk

The tree is a set of blue-green infrastructure, which is as important for the healthy development of the city as the technical or transport infrastructure. This seems to be a long time for two isolated worlds. In the world under the sidewalk, there are owners and managers who control and claim that they have nothing against trees, but that the tree does not fall within their norm. There is a lot of public and politicians in the world above the sidewalk. He wants to restore and plant a tree, but he doesn’t know that due to the poor management of the space in the basement, it’s practically impossible. By defining the concept of planting sites and planting dogs, the standard of the space of technical equipment would create the necessary space for roots between pipes and cables and thus facilitate the planting of trees and trees in the streets of cities.

License All first reserved. Dal en is mon only with the consent of the author

The goal of IPR Prague was to connect these two worlds, to equate trees with other technical infrastructure and to ensure that the standard recognizes them as an equal element of urban space. The change was to disrupt the mutual relations so that there would be no damage to the tree and their expulsion from the streets, and at the same time to open a discussion and question the established practice that the tree must always give way. Therefore, IPR Prague, among other things, in the text sought to define a common enforceable space, in which the coexistence of the old tree is attached and the conditions of mutual protection are set.

The form of the standard is decided by the TNK 66 Engineering Standard for Standardization (TNK 66), which is part of the Agency for Standardization (AS) established by the Ministry of Industry and Trade R (MIT). TNK 66 is composed of a representative of the administrator and the owner and a similar group and a commemorative group (approximately 120 people), which acts as its professional advisory body. In 2015, IPR Prague became a member of this group and was the only participant to actively lobby for trees. He tried to change the text and, together with the others, commented on the individual versions of SN 73 6005. 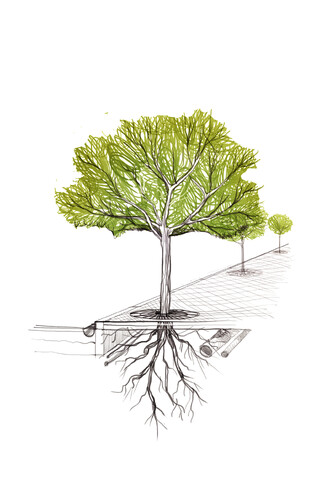 License All first reserved. Dal en is mon only with the consent of the author

The process of updating the standard was full of power games, promises and reversals. At first, it seemed that one would lead to an agreement, but in December 2018 there was a major breakthrough. TNK 66 canceled an agreement to discuss the text, which took into account the needs of the tree and the concerns. The official IPR Prague followed and the text was submitted to the ministers concerned. Here, after a big storm, the necessary consensus was not reached and the completion of the text was handed over to TNK 66, which, behind the closed two, drastically reduced the number of measures for trees. It can be considered that the article on the supremacy of the center has been released and the overall high standards will be blue-green infrastructure neutral.

And it was not full, the effort bore fruit. The problem of the equitable first tree was a lot of media coverage, in the circles of the professional public there was a break in certain naivety and it was possible to initiate cooperation according to the action at the national level. The standard is neutral in the tree and the IPR Prague, SZKT and the Partnership Foundation, with the support of the MP and SMOR, negotiate a joint approach to ensuring the living conditions of the tree. In addition to specific practical problems, it is necessary to strive for changes in regulations and legislation. In this sense, you will need to support the activities of the Working Group of the Capital City of Prague, which is looking for optimal procedures for the establishment and use of trees in Prague or the law of the SN 83 9051 standard, the AOPK standard and the concept of blue-green infrastructure.

1 National Action for Full Adaptation to Climate Change states: To determine the urban requirements for protection against urban heat islands and to propose a procedure (pp. Tools) to take them into account in the framework of land filling and the conditions of spatial management of technical equipment. kol m bt een primarily through trees and rainwater management (kol SC14. 1.1).

2 In the future, the non-spatial relationship between the green and blue infrastructure may complicate the rounds of the Government of R’s strategic documents such as the Digital Economy and Society,

The text was originally published in KA bulletin, 3/20.

In Prague, another part of the replacement of public transport stops is coming to an end, it should be finished by the deadline

‹ The man who masturbated in front of the women in Prague reported himself to the police. She is looking damaged › A secret rum island in the center of Prague. You must be invited to exclusive Cuban rums