Alexei Navalny: His detention was demonstrated in Prague

Navalny, who is considered the most serious opponent of President Vladimir Putin on the domestic scene, detained by police last Sunday at Moscow airport after arriving from Germany. There he was recovering from the August poisoning he attributes to Putin and the FSB secret service. The Kremlin denies it.

“We, the emigrants from Russia, Belarus, Ukraine, Kazakhstan, the citizens of the Czech Republic and the people of Prague, we consider it necessary in this situation to make public support for maritime support,“Said the artist Anton Litvin. According to him, political repression and the promotion of democracy, freedom of expression and European values ​​must be opposed.

The demonstration took place in Russian with a Czech translation. Activists spoke to her and songwriters performed. They reminded that similar events are taking place in Russia and other European cities. “We must not forget the other political prisoners. Write them letters so that you can see our support, “said Olga Storozhevova from Boris Nemcov’s Academic Center.

She recalled Havel’s motto “Truth and love will triumph over lies and hatred.” According to activists, if a lot of people respond and support, change will succeed. Storozheva thinks that many people in Russia are beginning to realize that not everything in the country is developing well.

According to the organizers of political prisoners in Russia or Belarus, it is increasing. They invited participants to send them letters and show them their support.

The demonstrators had banners with them in support of Navalny and the release of political prisoners or against the Putin regime. Some brought Russian flags. Belarusian flags were also seen in the crowd. They started to break up before 16:00.

Already in the morning, a protest took place at the Russian embassy, ​​which, according to an estimate by the ČTK reporter, about two hundred people arrived. Mostly young people came. Protesters brought banners in Russian and English. It said, for example, “Freedom of the Navalny”, “We want democracy, not dictatorship” or “Enough injustice”. Russian popular music was heard. The crowds sang. Some had a Russian flag. There were metal barriers around the Russian embassy. The police supervised order. The protest was peaceful.

According to statistics from the Ministry of the Interior, about 41,900 Russians live in the Czech Republic with a permit. More than half of them can stay in the country permanently. 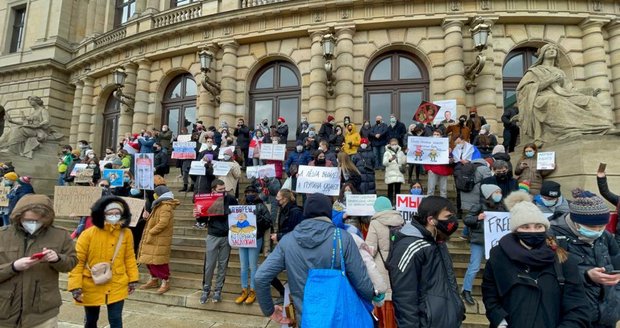 Protest against the arrest of opposition leader Alexei Navalny in Moscow, Prague on January 23, 2021.

The Czechia is at the forefront of Europe. Fiala did not want the opening of the presidency in Prague

‹ Property tax 2021: Instructions and calculation online, quickly and clearly › Prague and the Central Bohemian Region help to get suburban trains underground and connect them with the metro