It is best to live in Prague. Hradec Králové has also succeeded, where knowledge is safer

These are the main reasons why Prague won this year’s Comparative Survey Place for Life. In it, the analytical agency Datank evaluates statistics obtained from independent sources and data from a survey of 1250 inhabitants and mayors of all regions. The media partner of the project is Deník.

ON-LINE: Cases of coronavirus are increasing rapidly in the Czech Republic. More frequent tests are also to blame

“The capital is ranked high in all areas. As for health care, for example, it has the highest number of doctors, dentists and hospital capacities per capita, the lowest average morbidity, the population is living to the oldest age, “says Petr Lutonský on behalf of the survey organizers. 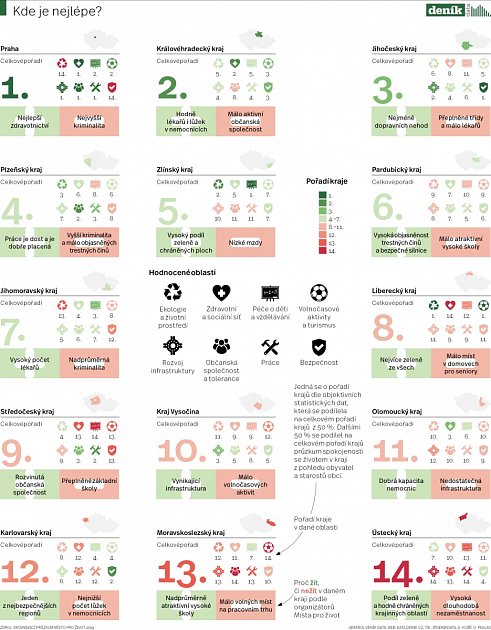 Source: DiaryHowever, as it must be, the metropolis is at the very tail of the evaluation of regions in the field of environment and safety. Despite the above-average number of police officers, the highest crime rate remains in Prague, the previous clarification of criminal offenses and even on the roads is not completely safe.

The second most friendly region is the Hradec Králové region. You will achieve excellent results in the field of health care and social services, for example, the locals have the closest of all regions to the pharmacy. It is also great in the region in terms of leisure activities. And in contrast to the overall victorious Prague, it is safe in the area, as evidenced by the very low crime rate and the above-average clarity of crimes.

Living alone is the first step to the family. Two thirds of Czechs live in their own

The bronze medal was then occupied by the South Bohemian Region. The best result you will achieve in the field of road safety is the safest of all countries, the clarity of crimes is very high, crime is generally low and the police have had enough. In the south of Bohemia, the association’s activities are also developed, and there are above-average volunteer firefighters.

‹ Great resistance to the completion of the Prague Ring Road. Almost 50 ‘lejster’ protesters have arrived Business › The winning square was “hit” by a meteorite. It commemorates the founding of the 100th anniversary of the city district