Kiss us, the congress organizers are responding to Prague 7 officials

Failure to understand the request for advertising, or the struggle of Prague 7 against visual smog. Due to a dispute between the Parallel Polis Association and Prague 7, the cryptanarchists hung a large black tarpaulin with a vulgar inscription on their headquarters. In Dělnická in Holešovice, everyone passing by on the street literally hits the street. 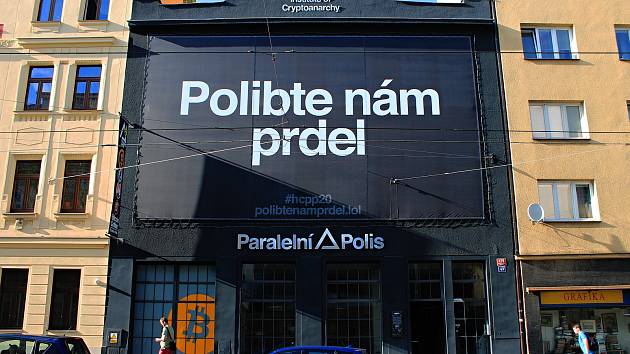 Kiss our ass, Parallel Polis tells the City Hall of Prague 7. The building in Holešovice houses, among other things, cafes, where it is possible to pay only with cryptocurrencies, such as bitcoin.

It all started around the middle of August, when the “cryptanarchists” asked the Prague 7 Department of Transport to take part of the sidewalk they needed when installing the advertising banner. The poster across the house with a snake wrapping a triangle was to be an invitation to the seventh annual hacking congress on October 4, where a number of foreign personalities from the field of cryptocurrencies are to rotate.

“We exchanged several emails with Prague 7. They received the original invitation. They explicitly wrote to us that they do not allow this banner, “says one of the founders of Parallel Polis, Pavol Lupták.

According to Prague 7 spokesman Martin Vokuš, such an explicit ban did not occur at all. The decree, thanks to which visual smog, including large banners on the facades of buildings, will disappear from the wider center of Prague, has not yet come into force. “Since 2018, we have had rules in Prague 7 for placing advertising in public spaces so that problems do not arise, for example, in transport. But they are not binding, it is just a set of recommendations, “explains Vokuš. According to him, the cryptanarchists could easily install the original poster without penalty.

“The Department of Transport did not just point out that it did not prohibit a decree that would ban similar advertisements in the future,” says Vokuš, noting that the procedure for their application has not yet been completed and Prague 7 has not issued a final opinion. “We take it as a misunderstanding rather than a disagreement,” Vokus describes. According to him, the forthcoming decree, which also includes a manual for public spaces, is to maintain similar misunderstandings.

However, Polis considers the Office’s actions to be an interference with his sovereignty and manner of expression. “It bothers us that this is only a subjective assessment of an official,” says Lupták. According to him, the hacking congress is an existing matter for the institute. “As an institution, we are not receiving any independent support from the state. That’s why we reacted like this, “describes Lupták.

Is it effective to be vulgar?

According to him, the use of vulgarism in public space in this effective case and the association does not throw itself away in any way. “It is important to distinguish between stubbornness and vulgarity. Czech is a flowery language and the term Kiss Ass can have several meanings, “thinks Lupták.

With respect to the values ​​of the historic city. Prague has published a manual of tasteful advertising

Parallel Polis was established as a non-profit organization in 2014 in Prague. According to her website, according to her philosophy, the management of the company in the form of the state is long overdue. It does not draw any funds from public funds, lives on donors’ contributions and organizes various events. In the house in Holešovice, Prague, IT experts hold various discussions and lectures on cryptocurrencies, technologies and other current topics. There is also a café where you can only pay for cripples, such as the famous bitcoin.

‹ After paper or bottles, Prague will also start recycling aluminum coffee capsules › Mysterious Zátory: the vanished Prague district could have been the most beautiful place in the city