Nový Barrandov: Prague 5 approved a territorial study for the construction of a new district

The current Barrandov housing estate will be expanded in the future by another new district, the so-called Nový Barrandov. At the end of July, Prague 5 finally approved a territorial study with all the comments of both the city district and local residents. “We don’t want just another dormitory here, but a real city neighborhood where people will live and spend their free time. That is why it was a priority for us to create a large park for sports and recreational use, a school, kindergartens, a polyclinic and a post office, ”explains Councilor Zdeněk Doležal, who is in charge of territorial development.

Compliance with the developer

According to Doležal, it was also possible to find an agreement with the majority owner of the territory – the company Finep. “The developer promised us that he would participate in the construction of the future square and sewer collector. Now we still have to agree with the other landowners. Without an agreement with them, it is not possible to guarantee the fulfillment of the vision of a living city, “said Councilor Doležal.

The design was developed by studio A69

The author of the project is the A69 architects studio, which is also responsible for the design of the new form of the Motol Valley. “Although our proposal has changed a lot over time, the fundamental vision has been maintained. The proposed structure of the new city district will have a clearly separated public and private part. The original design also included taller houses and the boundaries of the residential area and the park. Based on the comments of local associations, which perceived this more as a wall, we adjusted the height of the buildings on the floors to the mutual satisfaction, “describes the modifications Barbora Havrlová from studio A69.

Local associations also praise the willingness of all parties involved. “We really appreciate the concept of the roundabout main street. We also consider an ecoduct to be important, enabling the interconnection of the Prokop Valley and Chuchelský háj ecosystems, ”said representatives of the Pro better Barrandov association.

“From our point of view, this is the historically best territorial study on the development of Barrandov, which takes into account the requirements and needs of citizens and the connection of the housing estate to the surrounding landscape. We appreciate the approach of the majority Barrandov developer Finep, which is suitable in the form of a new territorial study and he was able to find a compromise between his business needs and the public interest“fill in.

There will be an exhibition in the autumn

The investor was the first to decide to acquaint the public with the future of the new square. “The proposal will now be presented to the public so that people can influence the future shape of the square. As for the next territory, there is a need to change the zoning plan, “concluded Councilor Doležal. The public will be able to get acquainted with the study in detail, for example at an exhibition that will be created in Gallery G in the autumn. 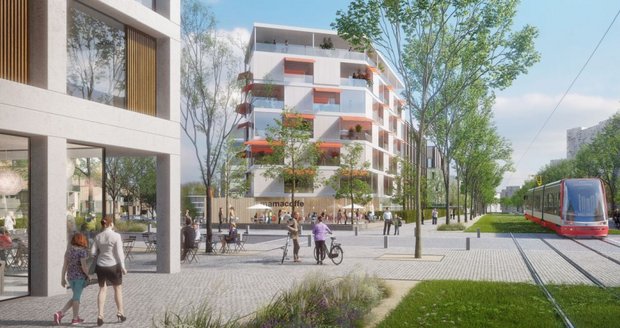 ‹ Design revolution. Trams and buses in Prague will change colors after many years. The bars will be vertical › In 2021, Prague 9 will expand the paid parking zones