Coronavirus in the Czech Republic. The first two cases are reported by Prague, one by Ústí nad Labem

Tests for coronavirus were positive in three of 13 cases. The results will be reviewed by a laboratory in Berlin, Vojtěch told reporters. A Czech woman, born in 1952, who was at a conference at the University of Udine, Italy, and an American woman born in 1999, who is studying in Milan, are hospitalized in Prague. According to the minister, she is in the Czech Republic with a friend from Ecuador who could not have symptoms, but her test was negative. A 1976 man hospitalized in Ústí was with his family in Italy. The family is now in quarantine.

All patients with positive tests are isolated in infectious compartments, said Vojtěch. “The 1952 man was at a conference at the University of Udine, after his return he was in domestic quarantine,” said Vojtech. According to the head of the Prague hygiene station, Zdeněk Jágrová, a man with hygiene has been in contact since February 26 and has only been in contact with his wife. “His difficulties escalated, so they were designed to prove his consumption,” she said.

The American woman was examined at the Motol hospital, then transferred to Na Bulovku. The test for her friend from Ecuador should be repeated on Monday, the minister added. “We find out information about those girls, we don’t have it completely accurate,” says Jágrová.

In the case of a man in the Ústí nad Labem hospital, this is a patient who was on a ski holiday in Italy, said Vojtěch. “He traveled by car with his wife and four children, they are all in the home quarantine and without symptoms, but because they traveled with this gentleman, the risk of infection is significant and will be tested in the near future,” he said.

The director of the State Institute of Public Health (SZÚ), Pavel Březovský, said that the results of the examination were most likely accurate. Nevertheless, the findings will be confirmed by a German laboratory. “Nevertheless, a hygienic investigation has been going on for a long time. We will continue to confirm samples of these contacts that they have. American colleagues and wives and children of cases from Ústí,” he said. 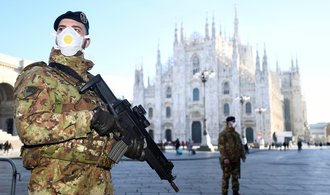 Vojtech said that people should consider trips to high-risk regions if they are not necessary. Especially in northern Italy there is a risk of infection, he added. He ruled out the closure of the borders, according to the authorities it would not stop the spread of the disease, it slowed down to the maximum.

Coronavir, which has spread from China since December, has so far infected more than 87,500 people worldwide and claimed nearly 3,000 lives. The overwhelming other cases concern mainland China, with Italy being the hardest hit in Europe. The surrounding countries also informed about the new requirements on Sunday. In Germany, the number of those infected almost doubled to 117 on Saturday. Austria reported four newly infected cases and a total of 14 cases.

The highest danger, says the sexologist about the strangler from Bohnice. The young man remains locked up

‹ OneRepublic in Prague O2 arena › City memory. Transformations of contemporary Prague through the stories of those who are most affected