She came to the zoo as an unwanted gift. The elephant now celebrated her 60th birthday in Prague

Tejesh Sharma also attended the birthday event. That the name doesn’t mean anything to you? Do not be shy. He is a descendant of a man who arranged for the then young elephant Gulab to move to Czechoslovakia. Indian businessman MM Sharma negotiated with the foreign trade company Metalimex and Mrs. Kostníková, secretary of the then CEO of Metalimex, took care of Sharma. “Before he left, he asked what he could do for her. In exaggeration, she said: ‘Bring me an elephant, for example.’ “Miroslav Bobek, the current head of the Troja Zoo, told a curious story.

A month after Sharm’s return to Metalimex, news came that the elephant – born in Ram Bahadur Thakur & Co.’s working elephant stables – was ready. There was a panic, because of course the animal would not fit the office in the office and the Prague Zoo did not even have the money to arrange a transfer from the Croatian (then Yugoslav) port of Rijeka to Prague. “It simply came to our notice then. Gulab was transported on the merchant ship Jiskra from Mumbai to Rijeka and then drove a truck to Prague, “added Bobek.

However, the party press described the events a little differently, the acquisition of Gulab was under Red Law (article with the headline It’s here! of 5 June 1966 below) as a result of negotiations by zoo staff. The female Indian elephant was to be a substitute for Peter, the first African elephant at the Prague Zoo. On July 28, 1965, however, the elephant Petr had to be transported to the Ostrava Zoo, which was the only one in the country to have a suitable and free pavilion. Gulab, as an “unwanted gift,” was to serve at least as a motive for the Communists to fulfill their commitment and give the elephants a new background.

Joyful news from the Prague Zoo: Elephants are pregnant. The boletus negotiated the pod 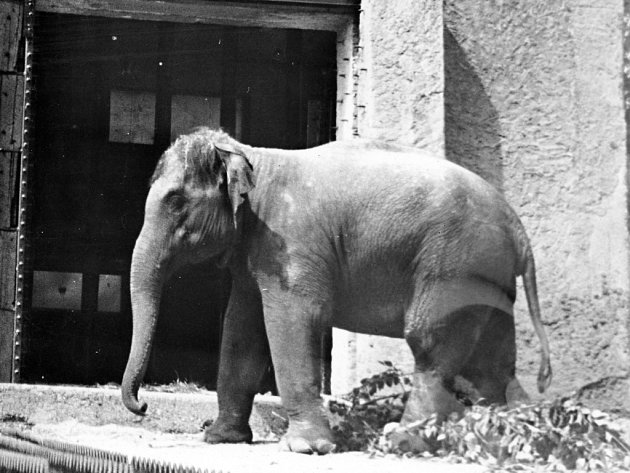 Source: Prague Zoo Archivewho? The elephant is it! Namely: all the inhabitants of the capital remember well why the popular elephant Petr left Prague: his apartment was falling apart. It was annoying, because we in Prague can do a lot, but he did not build a shelter for an elephant. The staff of the Prague Zoo did not give up. The employees of the construction company Construction of the Kladno Coal Mines helped, who promised to build a demanding pavilion for the elephant within three years. That’s not all. At the zoo, they said, what if he was at least some tiny, tiny, baby elephant like a pocket, but when he grows up, he would already have a beautiful apartment. Did the negotiations and the result begin? A young nine-year-old Gulab elephant girl, “only” two meters tall, weighing – well, what it is – made the journey from India to Prague less than two tons. And today, when, like every successful Sunday, they visited the zoo, we are already waiting for a “young lady” in Prague. Now we just keep our fingers crossed that it doesn’t grow faster than the construction of its pavilion…

Elephant Max celebrated his third birthday. They prepared a banana forest for him at the Prague Zoo

However, the pavilion for large mammals (elephants, hippos and rhinos) was not opened until 1971, at a time when society was beginning to normalize. The Elephant Valley, where Gulab lives as the leading female herd to this day, was completed in 2013 as the largest and most expensive (346 million crowns) building in the history of the Prague Zoo. And now, on Saturday, there is a celebration of Gulab’s 60th birthday, which actually came to the capital from Mumbai at the age of seven.

In addition to a rare Indian guest, curator of mammal breeding Pavel Brandl, witness Zbyňek Šíša, chief elephant breeder Martin Kristen and actors Miroslav Táborský and Pavel Kikinčuk came to wish. The staff of the Prague Zoo handed over a “cake” with roses to the birthday girl, because Gulab means roses. As a gift, the elephant received a huge wooden spool to play, which, according to the breeder, will make other members of the herd happy in the paddock, among whom the stubborn Gulab can gain respect.

The animals in the Prague Zoo are playing in the snow. The elephant makes balls, the tigers only need the ball

Prague still costs more than one hundred million a year for external lawyers. My reform will fix it

‹ In June 2014, the controversial Hotel Praha fell to the ground › An architecture that still provokes? Prague on the wave of brutalism