How we lived in Czechoslovakia. Election special – Expansion of Prague

The story of Prague with its 22 city districts, divided into 112 cadastral areas, begins in the 9th century, when Bořivoj of the Přemyslid family built his family seat on a hill above the Vltava River. The original settlement was concentrated in the castle grounds, but soon life spread to the territory of today’s Old Town. A thousand years later, another princely residence – Vyšehrad – is being established on the opposite bank of the river. The merger of the two settlement units laid the foundation of today’s Czech capital.

Already in the 14th century there was the first attempt to unite the cities of Prague and create a unified Prague. Four more unsuccessful attempts followed, and it was not until 1784 that Emperor Joseph II issued. court decree on the union of four cities in one, run by a joint municipality based in the Old Town Hall.

The connection of the Old Town, New Town, Lesser Town and Hradčany thus creates the Royal Capital of Prague and the conditions for further development of Prague are met. However, not all parts of the city flocked to the capital. Representatives of Královské Vinohrady, Karlín or Smíchov, for example, were afraid of their decision-making powers and long resisted the offered connection to Prague.

How we lived in Czechoslovakia. Election Special – From Mayor to Mayor

Ring around the center

In the 1940s, the municipality groped for a while in the organization of the city. In 1945, a new model of administration was created under the leadership of city councils and national committees. From their decision, in 1947, the twentieth city district joined the line.

How we lived in Czechoslovakia. Old Town and Josefov

Apart from Královské Vinohrady, which was divided between Prague 3 and 10, the rest of the district was assigned to the city districts with a lower serial number. This has reached the current state where circuits 4 to 10 are arranged around the historic center in a ring in a clockwise order from the southeast to the southeast. In the same year, the Capital City of Prague was granted status to equivalent regions and districts to status similar to districts.

The metropolis expanded to its current form twice more – in 1968 and 1974. After the establishment of Greater Prague, it was the largest territorial expansion. In the 1970s, the area of ​​Prague stabilized in 22 parts. 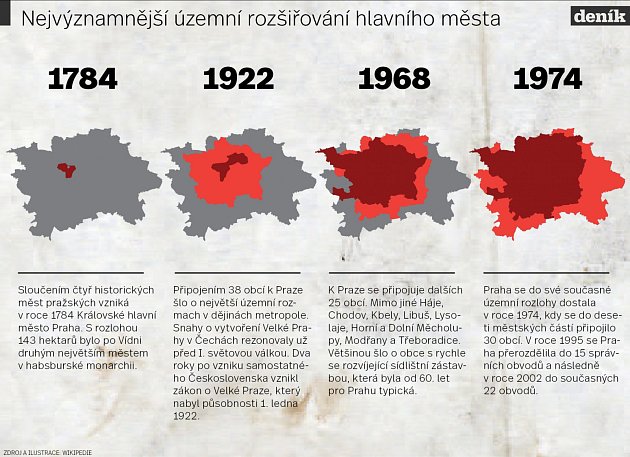 Where will we look next?Next Friday, with the Prague Daily series How We Lived in Czechoslovakia in the pre-election special, we will look at the crisis moments that Prague went through in the 20th century and how the municipality reacted to it. Do you have interesting pictures on the subject at home? Send them to us at the e-mail address: [email protected]

How we lived in Czechoslovakia. Vinohrady – divided kingdom