When Prague became blessed, but expensive: During the First Republic, everything became more expensive fourteen times

In the time of first world war people’s living standards have generally declined. Long military clashes in the trenches since 1914 they also collected their economic tax. Even in the first years after the establishment of the First Republic in 1918 they were with us the effects of the war are noticeable AND prices rose. The analysis of this period is devoted to part of the publication “Prague 1921” author Miroslav Honzík, in which Václav Průcha from the University of Economics is provided on the topic.

According to him, the prices of the basic needs of the Prague family rose every year during the war on average by almost half. In 1919 they increased by another 40 percent, the following year even by almost another three quarters. “It wasn’t until 1921 that retail prices stabilized. Between July 1914 and 1921, the prices of consumer goods and services in Prague increased more than fourteen times,added to the economic growth of the expert.

How much did people earn?

At the beginning of the 1920s, people in Prague often took home a weekly salary. In 1921 the weekly wage worker in the metal industry for example, she moved for 270 CZK, laborer he earned 30 crowns less. Master in construction received 430 CZK, textile master he had 300 CZK.

“Women who worked mainly in light industry were much worse off. Auxiliary worker in textiles she had a weekly salary about 100 crowns, skilled worker 145 AND master 200 crowns. There were monthly payments in the store, and even here the salaries were not high. Salesman earned about 600 crowns, accounting between 1200 and 1500 CZK and he could count on the same income and a foreign language correspondent“Václav Průcha explained the differences at the time.

What couldn’t the people of Prague afford after the war?

Many foods and products happened after the end of the First World War scarce goods. The quality also deteriorated and high prices prevailed on the black market. In 1920, a survey by the then Ministry of Public Supply revealed that it occurred mainly consumption of food of animal origin, legumes, beverages, fuels AND laundry. The post-war development of real wages was difficult. “However, wages were definitely in Prague in 1921 twenty to twenty-five percent lower than before the war“Described the economic expert.

100 years ago in Prague there were also considerable price differences between the center and the suburbs with the surrounding municipalities. “For some products, the price differences were tens of percent. The team distinguished the circle of customers. The majority of the population could not afford to shop in more expensive shops, and wealthy people did not go shopping in suburban shops and markets, “added Václav Průcha.

How much did the goods cost in 1921 (according to average prices): 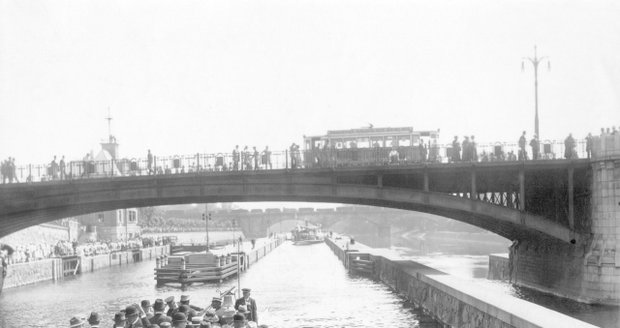 People on a steamboat in Prague in 1921, Hlávek Bridge in the background.

‹ Čižinský or Stuchlík? Prague Myself or Babis Myself? Krnáčová II will not save the metropolis › A satellite from a Finnish nuclear power plant found a typhoon off the coast of Japan in Shanshan