Imagine Dragons proved to be seasoned professionals in Prague

Although the last Imagine Dragons record called “Evolve” was one of last year’s weaker records, the concert at the O2 arena only sold out immediately. Czech fans know very well that the band can make live and average songs an experience. And it wasn’t published last night either.

place: O2 arena, Prague
Support: K.Flay
date: April 16, 2018
setlist: I Don’t Know Why, Believer, It’s Time, Forever Young, Gold, WhatIt It Takes, I’ll make It Up to You, Mouth Of The River, Yesterday, Start Over, Demons, Rise Up, Three Little Birds , On Top Of The World, Next To Me, Shots, Bet My Life, Thunder, Walking The Wire, The Fall, Radioactive
Photos are for illustration only.

Before the main stars of the evening arrived on the stage, the audience was given a bit to warm up the singer K.Flay. The name can be familiar to the Czech listener, mainly thanks to the remix of the song “Thunder”, which enriched his own word. Her own work is not very well known in her native America. However, the ongoing tour could interpret his work a bit tense, because as the short set showed, even the hit of this singer with an exotic, even squeaky pronunciation is no stranger. Her guitar-based hip hop has probably gained many fans in Prague.

Shortly after nine o’clock, a projection about the evolution of the Earth appeared on the main thematic screen, and immediately after it, the formation launched the opener “I Don’t Know Why”. From the opening tones, it was accompanied by color-changing LED panels, and the motion album cover was replaced by a very stylish projection of a pulsating cube. Daniel Platzman was playing the drums, and the floor was vibrating contentedly. Absolutely perfect introduction. Only giants can afford to place their greatest hits at the top of the setlist. Imagine Dragons probably belongs to them, as the duo “Believer” followed with an acoustic introduction and the groundbreaking single “It’s Time”. The band included a new cover of “Forever Young” in the first act, which Dan Reynolds sang unaccompanied. 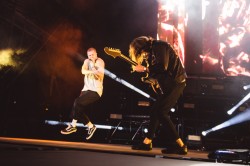 The frontman put absolutely everything into his output and shouted into the microphone even more than on the studio versions. One is surprised that vocal cords still serve him. He also spoke in a charistmatic voice to the publication. For example, before the ballad “Demons”, which can shed tears in his eyes even after five years, he should raise awareness of the depression he was already suffering from. He started the pub “Yesterday” with a slightly philosophical speech. “Time does not exist. Only presence. Are you present?” he asked. While singing around the stage, he also managed to jump in various ways, which must be really exhausting. But he didn’t let him know at all, he just took off his tank top after the first third of the performance, which certainly pleased the women’s audience. 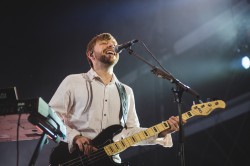 In the end, however, the band took a break. That’s when she moved to a small podium on the opposite side of the hall, where there was a short acoustic set. Twenty One Pilots changed their position at the concert a year and a half ago. However, this was not the only surprise. When the novelty “Next To Me” began to sound in a significantly slower version, it began to fall from the ceiling of giant inflatable balloons. The attentive viewer has noticed them before, but the audience will be cheating on them during this more contemplative part, but probably no one expected them. It was also supposed to start during the hit “On Top Of The World”, as explained by Dan, who aired fries in this part of the arena. Dragons they deserve great praise for this part of the program, in the quiet version they also showed “Shots” and “Bet My Life”, which tested the audience’s attention a bit risky. During the very end, perhaps no one was sitting anymore. Megahits “Thunder” and “Radioactive” took care of it more than well. During thunder songs K. Flay visited the stage once more, the second one was spiced up by the drum solo. It’s nice to have some security in life. One of them is the fact that the Las Vegas quartet will supply a huge amount of energy with their show. And it just has to be experienced.