“It is a desperate, drastic, escape solution that will bring trucks on a low-quality road in the Central Bohemian Region. The carrier will slow down. In addition, other municipalities may react similarly, which may lead to complete paralysis of road traffic. It is an unusual step, the problem is being solved in Europe by city tolls, “says Emanuel Šíp, chairman of the transport section of the Chamber of Commerce. In response to Prague’s progress, Říčany has already approved a ban on the passage of vehicles over twelve tons.

“We know how Spořilov ended up when the trucks went over him. Perhaps there is pressure on the central authorities to prepare the relevant legislation quickly, “adds Šíp, alluding to the law on linear constructions, which would speed up, among other things, the completion of the Prague ring road and has not yet come into force.

It is the inhabitants of Prague’s Spořilov that Deputy Mayor Petr Dolínek (ČSSD) often disappears in the argument why to ban trucks in Prague. As a result of the unfinished outer ring road, it is the South and Štěrboholská junction and Spořilovská street that use freight transport to pass through Prague, which, according to locals and Dolínek, leads to a disproportionate burden on the health of the population.

However, Šíp, the Ministry of Transport, the police, the Central Bohemian Region, and not the carriers themselves, do not hear the argument either. “The idea is so absurd that the councilor convicts of utter incompetence. There are hundreds of companies, warehouses and logistics centers in Prague that cannot do without truck service, “states Jan Medveď on behalf of the Česmad Trucking Association, stating that up to ten deliveries would go to the city instead of one forbidden truck.

“To flood the surrounding villages and small towns with unsuitable means of communication in transit is the arrogance of power. That the Prague Ring Road is not completed is not the fault of the inhabitants of Central Bohemia, living in municipalities that will be extremely affected by trucks looking for any way, “adds Medveď.

“As a result of the ban, there is an increase in prices in other places, to which today’s supply reaches the Southern Link. It will affect shops, manufacturing companies, postal and delivery services, “concludes Medveď, noting that Prague can divert attention from its own problems with infrastructure, for example with the Libeň Bridge. 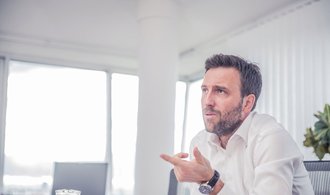 A robber with a weapon raided a shop in Prague. The police caught him on the bus