Prague is on the verge of an epidemic. The number of people living with HIV is skyrocketing

“In recent years, we have seen a steady increase in the number of people infected every year by 10 percent,” described Jiří Pavlát, director of the House of Light. At the moment, every fifteenth gay in the metropolis is HIV positive, if growth continues, it will be every tenth in five years. The problem concerns the whole republic, but most significantly Prague.

Praguers can be tested for HIV and jaundice for free

HIV is still associated with stigma

The number of diagnoses per 1 million inhabitants in the capital is almost four times higher than the national average. There are several reasons, on the one hand the environment of the city is anonymous. At the same time, HIV is still associated with a certain stigma. “Prague is also a tourist destination,” Pavlát reminded. Many tourists from countries where the infection is even more common than in the Czech Republic come to the city. For example, from Russia. Probably the same problem, however, are those individuals who do not know about the infection, because the infection spreads further. The epidemiological model of the State Medical Institute estimates their number at about 700 people.

Condoms are rarely used in the Czech Republic

“550 of them probably live in Prague and half of them are heterosexual men,” warns Pavlát. The specifics of the development is the increasingly frequent occurrence of heterosexual men. “It’s because of the type of sexual intercourse,” Pavlát explained.

There are two HIV centers in Prague

“It turns out that AIDS is no longer as scarecrow as it used to be, because people think that modern medicine can be used to kill HIV,” said health councilor Radek Lacko (YES), noting that it is still important to emphasize that it is a disease. incurable and dangerous.

There are currently two HIV centers in the metropolis, namely at Bulovka and the Central Military Hospital (ÚVN). However, the latter does not have a contract with VZP. The insurance company rejects it, which complicates its operation.

“Prague is interested in influencing VZP’s policy, for example, the nomination of a city representative on the board of directors. I hope that Prague will have the power to resolve and improve the situation at ÚVN, “Lacko promised. Based on calls from experts, the management of Prague has now decided to create an action group that will have a problem to address. The proposal was approved by the Municipal Committee for Health and Housing. “The group should include representatives of the professional public, organizations that deal with the issue at a practical level, and representatives of the relevant branches of the municipality,” said Lacko. The group is to determine the Prague strategy for HIV prevention. The next step will also be the metropolis’ entry into the Fast Track Cities program, a network of cities that actively fights the spread of HIV.

The number of people living with HIV is rising, Příbramáci does not go for testing 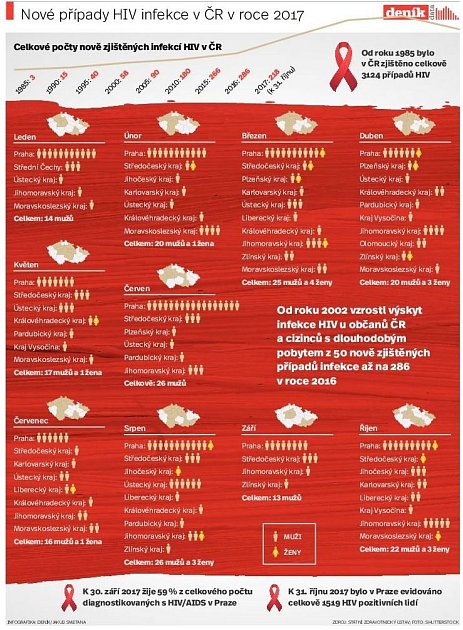 ‹ Prague versus the rest of the republic. Why Czechs are forever convicted after the election – HlídacíPes.org › Finland Finland 100 Independence Day celebration in Beijing