“The garden in the style of French parks and sculptural decoration was destroyed by an artillery battle between the French army occupying Prague and the German army,” writes Petr Ryska on his portal Prague Unknownwhich offers an atypical view of individual Prague districts.

After that, the territory of the former garden served as an artillery depot and laboratory. The names of the adjacent streets Zbrojnická, Dělostřelecká and U Laboratoře are a monument to this period.

After the establishment of the Czechoslovak Republic, construction began in this vast territory. New civil servants needed decent housing in Prague, and individual foreign embassies were also looking for a good residential address.

“When in 1919 the Ministry of Public Works announced a competition for the construction of family houses of the Construction Cooperative of State and Other Public Employees, still on the basis of the valid Act on Small Dwellings of 1911, the area between Buštěhrad Railway and Střešovice Road was designated for the garden city. The houses in this new locality, whose streets try to follow the terrain as much as possible, were supposed to contain 15 percent one-room and the same number of four-room flats, with two-room and three-room flats predominating, ”explains Petr Ryska.

One of the competition conditions of the new Ořechovka district was a comprehensive, clear spatial delimitation of individual housing units and courtyards and a part of the garden for each of the apartments. By alternating the type of terraced and insulated houses, the monotony of the development was to be avoided. The winning design by architects Jaroslav Vondrák and Jan Šenkýř from the competition became the basis for the definitive urban design of this residential area.

During the 1920s and 1930s, other streets began to emerge around the original Ořechovka. Villas were built here according to individual designs. During the First Republic, Ořechovka became one of the best addresses, and this is still true today.

Dělostřelecká and Klidná streets with a small neighborhood of standardized houses built in the style of Rondo Cubism.

In 1927, the villa town acquired a central space with a square from the architect Alois Dryák. “Tennis courts, a children’s playground and toboggan runs were sensitively set in the park layout, and a monument to the fallen of Střešovice during the First World War was erected at the top of the square. The area was given the official name Na Ořechovce Square, in the 1960s it was changed to Machar Square according to the poet Josef Svatopluk Machara, who lived for many years in a villa in the nearby Cukrovarnická Street, “informs Petr Ryska.

The central federal and consumer building by Jaroslav Vondrák has stood in Ořechovka since 1921. It was built in parallel with the residential houses and became the commercial and social center of the colony. The main facade of the house faces Machar Square. There were shops, a market, a cinema, a restaurant, a café, a theater and dance hall and doctor’s offices. The post office and the common room also entered the building. 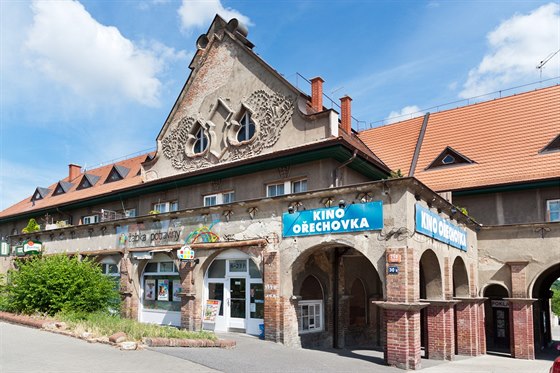 The central federal and consumer building by Jaroslav Vondrák has stood in Ořechovka since 1921.

One of the most famous streets in Ořechovka is Lomená. The houses designed by Jaroslav Vondrák and Jan Šenkýř from 1920 – 1922 mimic the morphology of the English garden towns of Bedford Park, Hampstead and Letchford with their typical triangular gables, narrow rectangular windows, tall chimneys and half-timbered masonry.

Břetislav Benda (1897-1983), who is one of the most important Czech sculptors of the 20th century, lived and worked in the house. He was a pupil of Josef Václav Myslbek and Jan Štursa and a member of the Association of Fine Artists Mánes. The artistic expression of Břetislav Benda is best described by his own words: “I do not know a motif that is rarer than the human body, and especially a woman’s.” He mainly modeled bronze and marble sculptures of the female body. 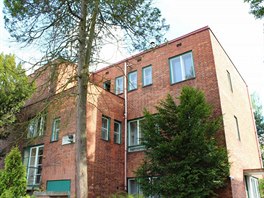 Villa with Václav Špála studio in Na Dračkách street. The villa was designed by architect Otakar Novotný, who focused on Dutch-style brick architecture made of cutting masonry.

Painter, graphic artist and illustrator Václav Špála (1885-1946) commissioned the project of the Střešovice villa from his colleague from the Association of Fine Artists Mánes. His house was built in the years 1931-1932 and combined residential and work function – an apartment for a family of five and a painting studio. The villa was designed by architect Otakar Novotný, who focused on Dutch-style brick architecture made of cutting masonry.

The villa for Alfred Justitz, in a gray design, but with non-original windows, is the work of František Antonín Libra from 1931. Alfred Justitz (1879-1934) was a representative of the founding generation of Czech modern painting, a prominent graphic artist and illustrator.

The painter Vincenc Beneš (1883-1979), who was a member of the Czech Academy of Sciences and Arts, the Association of Fine Artists Mánes, the Group of Fine Artists and Osmy, lived and worked in the house. The house was built in 1923 according to the project of architect Pavel Janák in the popular “Dutch style” with gray masonry on the facades.

For the Cubist painter, graphic artist and sculptor Emil Fill and the psychologist František Krejčí, a double villa in the same style as the villa of Vincenc Beneš was again built in 1923-1924 according to a design by Pavel Janák. 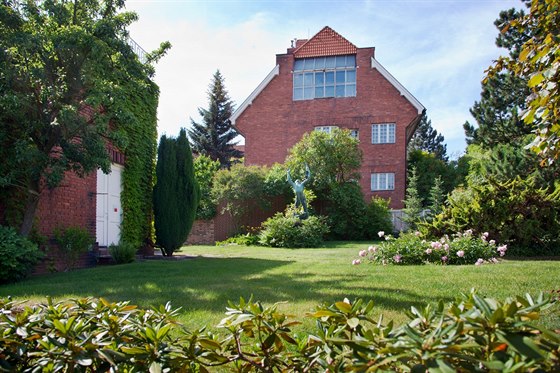 The villa of the sculptor Bohumil Kafka (1878-1942) was also built according to the design of the architect Pavel Janák. Kafka’s works are a jewel of Czech Art Nouveau symbolist sculpture.

The villa of sculptor Bohumil Kafka was designed by project architect Pavel Janák. Kafka’s marriage was left without heirs. The artist’s widow therefore left the guilt of her caregiver, whose family has owned it since 1965 to the present day.

The villa belongs to the set of Janák’s buildings (villas of Vincenc Beneš, Emil Filla and František Krejčí and Bohumil Kafka) realized in Ořechovka in the years 1923-1924 for the Building Cooperative of Fine Artists and Writers.

The architect was inspired by the sober Dutch architecture of gray red bricks. To the right of the villa is a sculpture studio with a roof terrace.

Sculptor Otakar Spaniel built an Art Deco villa according to the plans of architect Ladislav Machona on the corner of Na Ořechovce Street and the main square. Otakar the Spaniard (1881-1955) was an important sculptor, medalist and carver. His work was based on Art Nouveau. For the former creation of medals, portraits, plaques and coins. Among the most prized and most beautiful coins in the world is his single-crown coin from 1921.

Summit in Prague ONLINE: Prague hosts historic meetings within the framework of the EU Presidency

‹ Prague is opening its data to developers – for example, download data from a 3D model of Prague › The Prague Stock Exchange has a minimum dividend since the crisis, 800 less is enough