The year was 1840, when a son, Jakub, was born in the family of the Smíchov shoemaker Arbes. In addition to enriching Czech literature with a mysterious novelist and calling himself Polycarp Tupý, he became famous for something else: he never left his native Smíchov.

This is very admirable when we consider what this Prague suburb looked like in the second half of the 19th century. Quite unsightly: chimneys from breweries, malt houses and factories were smoking everywhere, the smells of leather, chemical or spinning mills were swirling in the air, and the dirty workers’ colony was provoked tonight from Ringhoffer’s wagon factory, foundry, and machine shop.

In neighboring Radlice or Košíře it was only a little better. It is no wonder that Arbes eventually exchanged thrilling short stories for critical social novels and that Smíchov and the surrounding districts were given the label of a tight periphery for the next century, where you came across a ragged poor and gray in a thousand shades.

But open the map in front of you. And in addition to traffic arteries and built-up areas, you will also see a lot of green places. All you have to do is name and soothe the picturesque names and pictures of vast trees, impenetrable forests, wells and ponds, sunny meadows, landscaped parks or lush groves: Prokopské and Dalejské valleys, Vidoule, Dívčí hrady, Kinský and Santoška gardens, Cibulka or Klamovka parks even the inconspicuous Skalka.

What a name, a charming nook that pulls the visitor out of the noisy present and transports him to peaceful timelessness. The ideal destination for a trip in time and space may be the Girls’ Castles, which are adjacent to the more famous Prokop Valley from the northeast.

The journey here can be an experience if you get on the semi-circular bus line 231 at the Na Knížecí stop, which climbs steeply over the Vltava through winding streets lined with villas and gardens. Then just conquer the last few tens of meters and you’re there.

“The view of the whole city, the river, Vyšehrad, Podolí and the whole of Prague is worth the effort. In addition, the people here are so distracted that everyone is calm,” rejoices the dark-haired Tereza, who walks the Labrador Tonda in the morning.

The view from here is really impressive, in one shot it parades the history of the whole metropolis. You can see the proud silhouette of Vyšehrad and the proud Žižkov Tower, the jagged Pankrác, the northern housing estate in Prosek, as well as the ugly Palace of Culture. From this perspective, however, unsuccessful architectural pieces can also be taken into account.

The joint circuit of Tereza and Tonda on the warm slopes copies the traditional tour of visitors around the unmissable water towers by architect Karel Hubáček, which was strewn with satellites and antennas like kerosene moths, further southeast to the natural monument Ctirad, where Joachim Barrande showed the first Czech fossils, rocky promontory above the railway to the fort Děvín.

Thirteen meters high lookout tower in Cibulka Park, from where there is a view of Motol and the local hospital on the opposite hill, a large housing estate in Řepy and a television tower in Strahov.

“It’s almost invisible, but there’s something in the air. The place has an interesting atmosphere,” Tereza waves a hand at the end of the hillside. A keen eye will find the unnaturally rolling landscape where the castle stood. However, you know this from Jirásek: the fortress was built by women after the death of Princess Libuše and under the leadership of the fighting Vlasta they flooded Prince Přemysl from the opposite Vyšehrad.

Wild nature in the Prokop Valley

You can enjoy the sun in the spring sunshine or go on another hike. The direction is obvious: down to Hlubočepy, to the beautiful valley of the Dalejský brook, which according to the famous hermit is called Prokopské.

When you look from above at the picturesque mixture of steep slopes and rocks, soft lawns, windswept slopes and rugged oak groves, you can’t believe that the industrial revolution has arrived from Smíchov here as well.

And yet here, in the second half of the 19th century, mining erupted, biting into the ubiquitous limestone in the quarries. There used to be a Schwarzenberg or Black quarry, a quarry by Prokopský jezírek, Sekaná ravine, Kalvárie, Požáry, U Kantýny or Mušlovka.

Today, there is peace and a 35-year-old nature reserve, in which rare species of plants, dozens of species of butterflies, beetles, amphibians, small mammals and birds grow happily. If you are very lucky, you will meet, for example, a nightingale, a chubby robin or a family of quails.

After all, you don’t have to visit here alone or accompanied by a printed guide. “We are preparing our local history walks to include classic tourist attractions and lesser-known places. It is in Prague 5 that we organize walks with a geologist in the Dalejské Valley,” says Nora Dolanská, which runs the Prague Information Service – Prague City. Tourism, where they know the metropolis to the last detail. 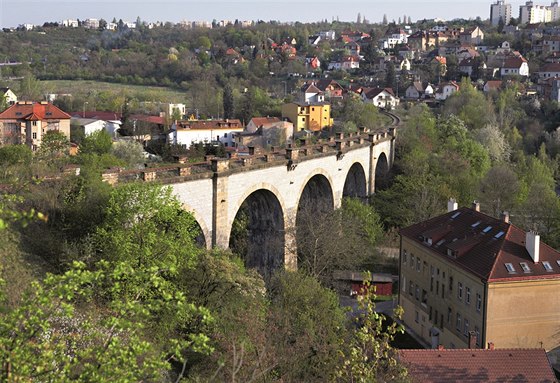 Today, the Prokop Valley is a nature reserve, where rare species of plants or birds grow happily.

Whether you go here solo or in a group, let yourself be lulled by the rustling of leaves and the singing of warblers with the idea that modern times have moved out of here voluntarily and forever. The technical progress here is non-violently reminiscent of the Prague Semmering, by far the most beautiful railway line in Prague, if not in the whole of the Czech Republic.

It winds from the forgotten northern platform at the Smíchov railway station through half of the fifth city district further to Zličín to Rudná. “With old viaducts and serpentines in the Dvín hill, this track is strikingly reminiscent of the famous Austrian Semmeringbahn,” explains historian Pavel Jirků as the railway came to its name.

So if you are not exactly the type for walking, the Prague Semmering is a suitable way to get to know the many lovely corners of Prague 5 in less than half an hour without taking an extra step. From the height of the 20-meter-high viaducts, you can see the pride of the Prokop Valley into the greenery, then use a motorbike to break through the jungle around the Žvahov stops so that the tracks rise along the slopes of Dívčí hrady towards Jinonice.

Here you will be hugged on one side by the windward Vidoule and on the other by Cibulka Park, a place promised to pensive natures. “It’s beautiful in the park, especially in autumn, when the leaves on the trees are fully colored or fog is falling in the morning,” recalls Aleš Němec, who does not hesitate to stumble here from Břevnov on the opposite hill.

The contours of the Chinese pavilion, artificial ruins with an observation tower, or hermitages are sometimes sharp in the flood of leaves, sometimes as if covered by a blanket of fog. Each form of Cibulka is equally impressive in every weather is an unchanging sad look at the Empire homestead that Bishop Leopold Leonard Thun-Hohenstein was already proud of at the beginning of the 19th century. Of the magnificent mansion surrounded by an English park, only a homeless shelter remained.

However, you will not see that from the train windows. Just as you will not explore other fragments of green Prague 5: the almost inaccessible forest, which is called Calvary in Motol, or the pampered Klamovka, which is especially pleasant in the summer thanks to the famous garden restaurant. The Kinský Garden is also nice, occupying 17 hectares between Petřín and nearby Anděl, and parents with children are again worth going to the new Sacré Coeur park with several playgrounds.

And what about the Lesser Town Cemetery, Malvazinky, Bertramka, Husovy sady, the natural monument Skalka u Kotlářky and other gardens, parks and draws scattered around Prague 5? It’s too much for one week or a month, but it’s the best inspiration for spring and summer.

A natural monument, which is a fossil site and where Joachim Barrande started in the Czech Republic, and the inconspicuous remains of a Slavic fort.

A little-known and little-used picturesque track between the Prague-Smíchov and Rudná railway stations, which shows passengers, among others, the Prokop Valley, the overgrown Žvahov, the slopes of Dívčí hrady, Cibulka and Vidoula.

where: trains leave from the northern platform of the Smíchov railway station

During its construction, a terrain notch was created, which revealed an interesting profile with layers of slate. It is adjacent to the natural monument Calvary in Motol with a stone cross on top of a rock.

Thirteen meters high lookout tower in Cibulka Park, from where there is a view of Motol and the local hospital on the opposite hill, a large housing estate in Řepy and a television tower in Strahov.

where: Košíře, above the public transport stop Poštovka na Plzeňské

A natural monument with an area of ​​almost ten hectares, where there are visible traces of the development of local rocks and sediments in the quarry. There were over six hundred species of butterflies.

Prague residents often do not declare their permanent residence, and the city loses billions as a result

‹ Air conditioning and wi-fi. Prague has cosmetically improved its contract for trams for 19 billion › Billionaire Kellner had the Hotel Prague cut: The Communist Palace of Luxury disappeared in 3 months!